Our first full day of our Meretz-Brit Tzedek Symposium – and it’s been a full day. The morning was spent with a tour of significant areas of East Jerusalem by Danny Seidman, a prominent human rights lawyer who is one of Israel’s foremost experts on the legal ramifications of Jerusalem’s East-West divide. He is also a consultant to Im Amim, an important Israeli NGO that actively engages on issues impacting on Israeli-Palestinian relations in Jerusalem and on the political future of the city. Among the many sites we visited was Har Homa (see pic above) – a massive 2,000 unit settlement built on land expropriated by Israel. The site was first developed in 1998 and was became infamous more recently when, only five days after the Annapolis conference, Israel’s Housing Ministry announced it would take public bids on 307 new units – an outrageous set of developments that almost killed the Annapolis peace process right out of the starting gate.

Needless to say, a political firestorm ensued, and it became clear that the whole thing caught Prime Minister Olmert flatfooted. How could such a critical move take place without the knowledge of the Israeli government, you might ask? That’s a very good question – and the answer has something to do with Israel’s complex settlement bureaucracy (or as Seidman called it, a “shadow government”) that is a product of a long-time relationship between the Housing Ministry and the settler movement itself. Though Olmert has vowed to clamp down on future settlement in the wake of Annapolis, it is not completely clear if this includes developments in East Jerusalem (territory which is still outside the Green Line, no matter what anyone might tell you…)

Spent the afternoon touring “Bare Life,” (see pic below) the latest exhibition at “The Museum on the Seam,” the amazing coexistence art museum located in a former Arab house/Israeli Army outpost that sits on the original pre-1948 border between East and West J’lem. (Highly worth a visit the next time you visit the city.)

For me, the most powerful part of the day was a tour of the West Bank city of Hevron by Yehuda Shaul, one of the founders of Breaking the Silence. BTS is a group of discharged Israeli soldiers, veterans of the 2nd intifada, that has taken it upon itself to speak out about the daily routine of life under the occupation in the territories – a routine that gets virtually no coverage in the media. (That’s Yehuda and me in Hevron, two pics down.)

One of the profoundly painful realities of Hevron is the manner in which much of it has been reduced to a virtual ghost town since the Intifada. For over ten years now, Hevron has been divided into two segments: H1, which is adminstered by the Palestinian Authority, and H2, which remains under Israeli military control. Together, we toured H2, a previously bustling Palestinian city center which was rendered eerily empty. Citing the protection of a few hundred settlers who live in the heart of Hevron, the army has severely restricted the movement of the tens of thousands of Palestinian residents.

Because of longtime social and economic separation – as well as ongoing settler violence (countenanced by the Israeli military) – 42% of Hevron’s Palestinian homes are empty and 70% of its Palestinan business have been shut down. The pic at the bottom tells the story – the city center which is now permanently shuttered, with hateful Jewish settler graffiti on every storefront. (Among the slogans I read: “Death to Arabs.” “Arabs to the crematorium!”)

Yehuda, an amazingly articulate young 25 year old (and a traditional Jew who grew up in a settler community himself) told us numerous painful stories about his own experiences doing army duty in Hevron. He also took us to visit a local Palestinian family who received us graciously and told us about life under curfew, road blocks and “sterilized streets” (an actual IDF term for roads that forbid Palestinian cars/foot traffic/commercial activity.)

What else can I say? This is not your average tour of Israel – but it is one I ferevently wish would be made more readily available to American Jews. More to come… 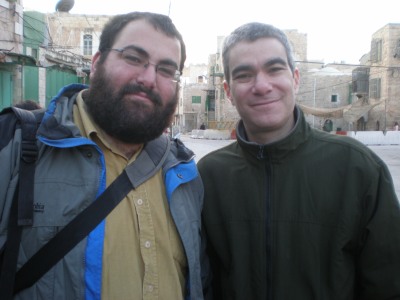 6 thoughts on “Borderlines and Ghost Towns”