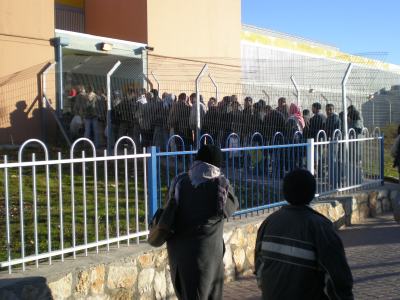 Amazing presentations today – we heard about the latest prospects for peace from Gadi Baltiansky, the Director General of “Education for Peace, Ltd” (the Israeli NGO that actively promotes the Geneva Initiative); during lunch we heard an unflinching and incisive presentation from prominent Ha’aretz columnist Akiva Eldar (his book about the settlers’ movement “Lords of the Land” is must reading); and this evening we enjoyed a stimulating, thought provoking presentation by Gershon Baskin, co-director of the Israel/Palestine Center for Research and Information, an influential, award-winning joint Israeli-Palestinian think tank. Our heads are spinning from these incredible presentations, and needless to say there is much to say about what we’ve heard (I encourage you to check out the Brit Tzedek trip blog for more).

In the meantime, however, I’d like to write a bit about how we spent our afternoon. After lunch we met with Hana Barag from the courageous Israeli NGO, “Machsom Watch” a group of women who have been monitoring checkpoints in the West Bank, documenting the abuses that routinely occur there. Over the past seven years Machsom Watch (which means “Checkpoint Watch”) has become an important and prominent human rights group in the West Bank. They currently visit a total of forty checkpoints twice a day, observe the behavior of the guards, document what they observe, and post extensive reports regularly on their website.

Hana is a diminutive, elderly woman whose outer appearance belies her fierce devotion to her cause. As she explained to us, her organization is made up of ordinary Israeli citizens, Zionists who are deeply concerned with the dehumanizing effects of the occupation – on soldiers as well as Palestinians. To this end, their work has three simple motivations: they are against the occupation, against the checkpoints, and for human rights.

There 546 checkpoints throughout Israel and the occupied territories – and over the last several years they have become an indelible part of the Palestinians’ oppressive day to day reality. Those who use the checkpoints regularly to go work or to work their fields must first receive a work permit, which are only allowed to relatively few Palestinians and which are issued through a complex and maddening bureaucratic process.

To complicate things even further, work permits can only be used at certainly times – and if workers are delayed at the checkpoint, they inevitably lose one day’s pay (as well as an employer’s tax that is passed on to the workers). The checkpoints, of course, are also used for a variety of other reasons, by children going to school, in cases of medical emergency, etc. Hana told us numerous painful stories about the humanitarian abuses that occur daily at these checkpoints, which can often take hours to pass through.

Though they are often characterized by the Israeli military as a security necessity, few realize that there are only three checkpoints that actually monitor passage across the Green Line – the rest are located within the West Bank itself. To be sure, the security rationale for these checkpoints are not self-evident (unless, of course, we are talking exclusively about the security of the settlers.) The Israeli military has admitted that they play an important role in Israel’s psychological war against potential terrorists – but one might well argue that the daily indignities that Palestinians experience at checkpoints only serve to further radicalize their population further – which one could well argue is an important security concern in its own right

With Hana as our guide, we observed the checkpoint into Bethlehem (delicately called“Rachel’s Passage” by the military because of its proximity to Rachel’s Tomb). The first thing I noticed as we arrived was how incredibly massive the checkpoint was – much broader and more physically imposing than I ever would have expected. I was also struck by the clean sterility of the place – and the incongruously cheerful signs on the exterior of the site. (Note the final line in the picture below – and compare it with the picture at the bottom, which shows graffiti on the barrier wall just around the corner from the checkpoint.)

Hana brought us into the checkpoint itself in small groups and explained the complicated passage procedure to us in depth. After visiting inside the checkpoint, a group of us were standing outside the front gate. Eventually, small buses pulled up one by one, bringing Palestinian workers heading home from work. As they exited the buses, they raced to into the checkpoint, clearly jockeying to get a decent spot in line. The line of workers quickly grew in length as they settled in for processing and passage.

Like our evening in Hevron, this was not easy experience for any of us to observe. It is difficult for me to write about this even now. Though many of us intellectually understand the reality of the occupation upon both sides of the conflict, it is something else entirely to witness it first hand. After spending just two hours at this checkpoint, I am personally in awe of those such as Hana and Machsom Watch, who bear witness to this reality on a daily basis.