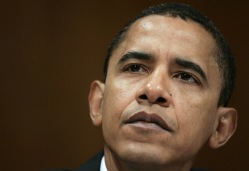 Barack Obama met yesterday with approximately 100 members of the Cleveland Jewish community – and to judge from a partial transcript from the meeting, his remarks shed some important light on his views regarding issues such as Israel, Iran, and global antisemitism. His words are especially trenchant in light of the current hysteria about Obama in some Jewish circles – citing his Muslim roots, his relationship with his UCC pastor Jeremiah Wright, and certain so-called “anti-Israel” advisers on his foreign policy team.

According to the transcript, Obama addressed these and many other issues head on. While some of it felt like traditional Jewish community political pandering, I was impressed at his willingness to address complex, hot-button issues with candor. Here for example, are his views on dealing with the Iranian threat:

My approach to Iran will be aggressive diplomacy. I will not take any military options off the table, but I also believe that under this administration we have seen the threat grow worse and I intend to change that course. The time I believe has come to talk to directly to the Iranians and to lay out our clear terms: their end of pursuit of nuclear weapons, an end of their support of terrorism and an end of their threat to Israel and other countries in the region. To prepare this goal I believe that we need to present incentives, carrots, like the prospect of better relations and integration into the national community, as well as disincentives like the prospect of increased sanctions.

I must say that as a supporter of Israel and someone who has long believed we need to engage with Iran, I was heartened to read of Obama’s willingness to say as much in front of a Jewish audience in the heat of hotly contested election campaign. I was also pleasantly surprised (and actually somewhat astounded) to read his analysis of Jewish community politics regarding Israel:

This is where I get to be honest and I hope I’m not out of school here. I think there is a strain within the pro-Israel community that says unless you adopt a unwavering pro-Likud approach to Israel that you’re anti-Israel and that can’t be the measure of our friendship with Israel. If we cannot have a honest dialogue about how do we achieve these goals, then we’re not going to make progress. And frankly some of the commentary that I’ve seen which suggests guilt by association or the notion that unless we are never ever going to ask any difficult questions about how we move peace forward or secure Israel that is non military or non belligerent or doesn’t talk about just crushing the opposition, that that somehow is being soft or anti-Israel, I think we’re going to have problems moving forward. And that I think is something we have to have an honest dialogue about.

Honest dialogue during an election season? What a concept…

2 thoughts on “Barack Meets the Jews of Cleveland”