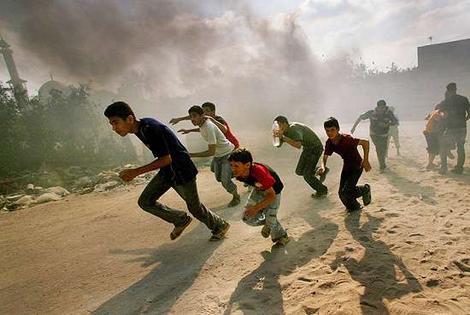 The tragic escalation of violence between Israel and Gaza has left over one hundred dead in its wake and has dealt a serious blow to current prospects for peace, but amidst this increasingly dismal news here’s one tiny gesture of hope: an online conversation between an Israeli blogger from Sderot and a Palestinian blogger from Gaza.

Apparently this project was born out of a dialogue group of Palestinian Gazans and Israeli residents of Sderot. According to Danny Gal, one of the dialogue’s organizers, the group fell apart when the Palestinian participants were no longer allowed to leave Gaza. So the dialogue continued online.

The shared blog is written by “Peace Man” (the Gazan) and “Hope Man” (from Sderot). Though their specific identities are kept anonymous, Gal says Peace Man is a man in his 30s who lives in the Sajaia refugee camp and worked as a teacher until they closed his school. Hope Man is an Israeli in his 40s who lives in Sderot and owns his own high-tech business. Most of the posts describe vividly the everyday life under fire in the two communities. More recently, the two bloggers unveiled a petition calling on their respective governments to institute a one month cease fire:

We, citizens of Gaza, Sderot and people all over the world desperately call on you, our leaders and decision makers, to completely cease fire immediately. Both sides are in a dead lock and One Month will give all parties an opportunity to rethink their policy and to find new paths out of this senseless and hopeless reality.

In the face of such an overwhelming and intractable conflict, it is easy to be cynical about a modest effort such as this, still, we must seek hope wherever it leads us – and I am personally heartened by the spirit of peace and coexistence it conveys. Click here for a Ha’aretz feature on the history of the project. To read the English language version of the blog, click here.