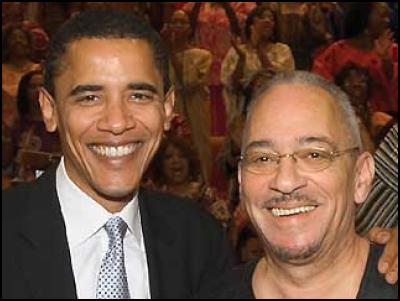 I can no more disown (Reverend Jeremiah Wright) than I can my white grandmother.

(Rev. Wright) would not have been my pastor. You don’t choose your family, but you choose what church you want to attend.

Like many, I appreciated Obama’s willingness to honestly and frankly address the issue of race in America during his speech last week. I don’t know that I have much to add to the substance of that issue, per se (click here for my previous post on the subject). As a member of the clergy, however, I must say there was another dimension of his words that struck me deeply – namely his unabashed willingness to stand by his controversial pastor as “family.”

Clinton highlighted even further the critical nature of this issue in her comments to the Pittsburgh press yesterday. Of course she is correct when she says that we choose our clergy and place of worship – and certainly no one should have to remain in the pew if they hear things spoken that they find patently offensive or unacceptable. But I do believe that Clinton missed (intentionally or not) at least two critical points made by Obama in his speech: one, that we need to understand the reality beyond the rhetoric, and two, that choosing a religious community and a religious leader should be more than just a consumer decision – ideally, it is tantamount to joining a family.

Obama made this clear in his description of his relationship with Rev. Wright:

As imperfect as he may be, he has been like family to me. He strengthened my faith, officiated my wedding, and baptized my children. Not once in my conversations with him have I heard him talk about any ethnic group in derogatory terms, or treat whites with whom he interacted with anything but courtesy and respect. He contains within him the contradictions – the good and the bad – of the community that he has served diligently for so many years.

Like many clergy members, I know I have said things from the bimah that have not sat well with members of my congregation. (As we all know, this tends to be most often the case when we clergy venture into that treacherous but critical nexus between religion and politics.) But speaking personally, over the years, it has become clear to me that the more I come to share in the overall spiritual life our our congregational community – the more I share in the joys and sorrows of its members – the more they will be willing to hear what I have to say, whether they personally agree with me or not.

Indeed, when I began this blog, I knew that I would be taking something of a risk in this regard. And while the comments posted attest that folks have not fallen in line with everything I write, I’ve been incredibly gratified by the positive response from JRC members who appreciate the chance to hear from me in a more unfettered fashion. (I have no doubt that for some, I sometimes come off like crazy cousin at the seder who’s at it again, but I guess that’s family, right?)

Obviously we can only push the “clergy as family” metaphor so far (and too many clergy lose sight of the difference at their peril, but that’s a subject for another post.) In the end, however, I found it to be enormously refreshing to hear someone of Obama’s stature go out on a limb and publicly testify to the sacred nature of his relationship with his spiritual leader (at no small risk to his political reputation). At a time in which many in the clergy struggle with our purpose and question our impact, it was a welcome reminder of the stakes of the work we do.

1 thought on “On Clergy and Family”