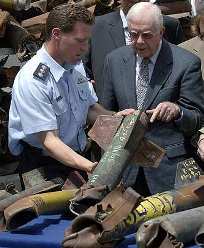 Jimmy Carter is once again arousing the ire of certain self-proclaimed spokespeople for the Jewish people. Now it involves his current trip to the Middle East and his plan to meet with Hamas leader Khaled Meshal later this week. Well, here is one humble rabbi who’d like to go on record as at least one member of the Jewish community who applauds Carter’s efforts at peacemaking – and his willingness to wade into territory that most diplomats are too timid to tread.

The bottom line? The only long-term solution to the current Gaza mess is to engage with Hamas who is, whether we like it or not, the governing authority in Gaza. (For an eloquent analysis of this point, read this recent letter to Condoleeza Rice from the Israel Policy Forum.)

To those who accuse Carter of over-favoring the Palestinians, it should be noted that he made a point of visiting with the family of Hezbollah hostage Gilad Shalit. He also visited Sderot (see the picture above of him examining Qassam missles). Afterwards, he was quoted as saying:

I think it’s a despicable crime for any deliberate effort to be made to kill innocent civilians, and my hope is there will be a cease-fire soon.

While it might be expected that Carter might not be thrown a welcome party by Israel’s current administration, I was particularly troubled to read in Ha’aretz that:

Shin Bet security service has declined to assist Carter during his visit, U.S. sources close to the matter said on Monday.

An American source described the snub as an “unprecedented” breach between the Shin Bet and the U.S. Secret Service, which protects all current and former U.S. presidents, as well as Israeli leaders when they visit the United States.

Government sources on Monday described the lack of Shin Bet during Carter’s visit to Sderot, an area often hit by rockets from the Hamas-ruled Gaza Strip, as particularly “problematic”.

Sad but not surprising: a world-renowned diplomat who has an actual track record of brokering an Arab-Israeli peace is snubbed (and worse) for his efforts. With the current peace process moving at a glacial pace, I’d say we can ill afford our Jewish communal Carter-phobia…

1 thought on “Yet Another Carter Brouhaha”