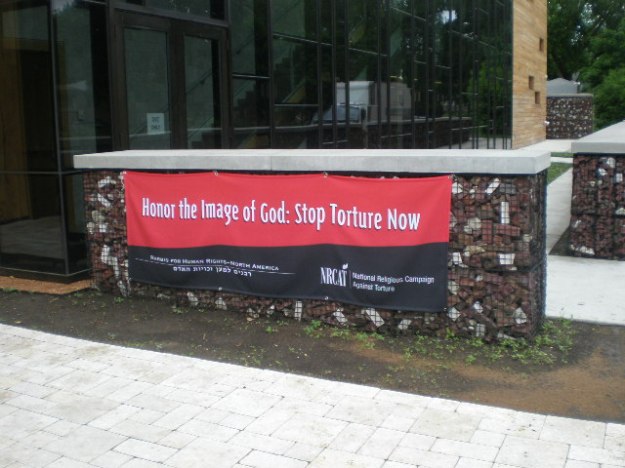 June has been designated as “Torture Awareness Month” – a time set aside to shine a light on the growing use of torture by our own country as well as other nations around the world. To mark this occasion, the National Religious Campaign Against Torture (NRCAT) and Rabbis for Human Rights – North America (RHR-NA) have mobilized more than 275 faith communities around the country to openly display banners in front of their houses of worship that convey one basic message: torture is a critical religious and moral issue for our nation.

There are 27 Jewish congregations displaying banners and I am proud to say that JRC is one of them (see above). JRC also recently joined the K’vod Habriot inititative of RHR-NA – a national network of Jewish communities and individuals committed to building a Jewish commitment to human rights. The K’vod Habriot Statement of Principles will give you some idea of the Jewish values behind this effort:

– “[We must] do what is just and right.” (“La’asot Tzedek U’Mishpat): For a nation to have legitimacy, it must enforce a system of law that is fair, equitable, and just.

– “Do not oppress the stranger, orphan or widow.” (“Ger, Yatom, V’Almananah Al Tonu”): We have a duty to promote a society that cares for the economic well-being of all of its members, especially those who are most vulnerable.

– We believe that the Universal Declaration of Human Rights flows from these Jewish values, as well as from our own historical experience, especially that of the treatment of Jews during the Holocaust. Therefore, it is incumbent on us, as Jews, to defend the human rights of all who are oppressed.

I encourage you and/or your congregation to join K’vod Habriot and help us put human rights firmly on the agenda of the North American Jewish community. NCRAT is also organizing an anti-torture Statement of Conscience – I’d say that signing onto it would be a very appropriate way to mark Torture Awareness Month.