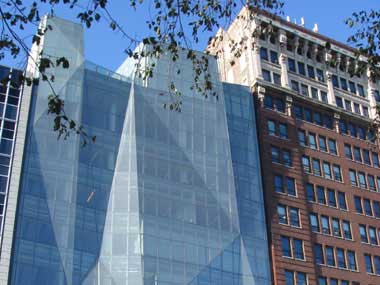 Sad news for the Jewish community of Chicago, for Jews everywhere…

“Imaginary Coordinates,” an exhibit at the Spertus Museum has closed down due to pressure from the Jewish United Fund of Greater Chicago. “Coordinates” explored historical maps of Israel/Palestine not simply as navigational devices but as tools that can “manipulate an outcome” and serve as “products of memory and spiritual imagination.” This innovative and important exhibit incorporated artifacts and videos, and sought to expand the conventional notion of cartography as the only way to define borders. When first mounted, it was initially suspended, then tweaked. Now it’s no more.

Apparently, the Jewish Federation here believed that an intelligent examination of the cultural influences of politcal borderlines is tantamount to anti-Zionist propaganda. Even since the reworking, the JUF, which contributes roughly 11% of Spertus’ budget, has been laying heat on the museum to cease and desist. This past week, Spertus finally buckled.

Aspects of it were clearly anti-Israel. I was very surprised that a Jewish institution would put forward this exhibition. I was surprised and saddened by it.

No, I’d say intelligent exploration and provocative debate is precisely what belongs at a Jewish institution – regardless of what certain powerful minorities in our community might say. I’m particularly troubled by this patronizing attitude that the exhibit should not be viewed without the “appropriate context.” Whose context – the Jewish Federation’s? Isn’t that really the point: that it was this sort of bias that the exhibit was seeking to explore?

12 thoughts on “The Buckling of Spertus”