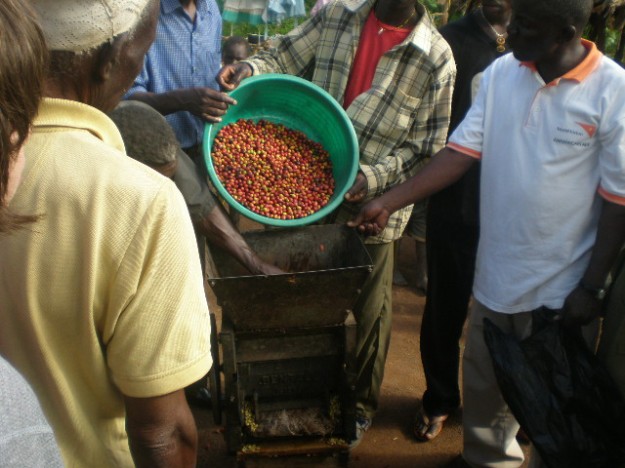 We’ve learned a great deal about how coffee is grown and processed on this trip and one of the most indelible lessons we’ve taken away is how interconnected and interdependent each step is to the next. Unlike the major commercial producers, rural coffee farmers like those of the Peace Kawomera coop must depend upon one another to succeed. In other words (to adapt an oft-repeated axiom) it really does take a community to produce a cup of coffee. As I wrote in my earlier post, we did a bit of harvesting at JJ Keki’s coffee farm this past Sunday. We subsequently learned about the complex journey taken by the coffee berries once there are picked.

The first step – and in some ways the most crucial – is called “pulping.” This refers to the husking of the outer red shell of the coffee berry. For quality purposes, pulping must take place 24 hours or less after the coffee is picked. Like most rural farmers, the members of Peace Kawomera have been pulping their coffee by hand, with a manual turn-crank machine.

The pix below were taken at the farm of a coop member named Mohammed – the harvested berries are poured in the top, the crank is turned, and the inner white beans come out the bottom. The leftover red husks are then taken and mixed with manure to be used as organic fertilizer. 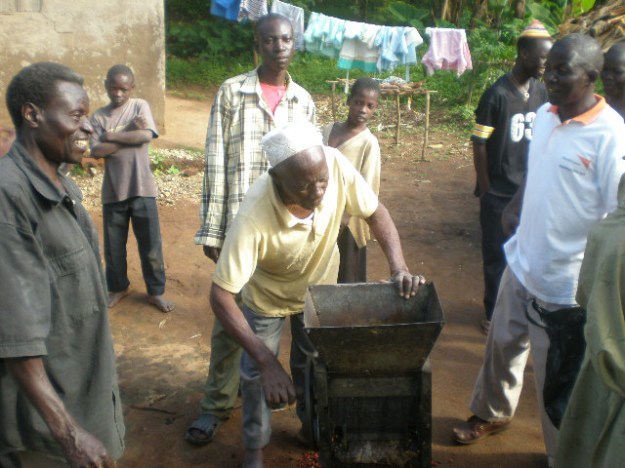 I mentioned in my earlier post that Peace Kawomera has recently been able to obtain a large, motorized machine to serve as the central pulper for the entire coop. Since every individual farmer does not own a own hand pulper, the coop leadership hopes that this acquisition will help the farmers expedite this critical initial process. The new pulper is an impressive and complex piece of machinery and has the capability of pulping 5000 five kilos a day. It runs on diesel fuel and requires water is pumped in from a nearby stream. It coop farmers will begin using the central pulper in August, as the coffee harvest goes into full swing

After pulping, the coffee beans are fermented and dried by the farmers themselves. They are then transported to Gumutindo, the location of a larger coop to which ten other farming coops also belong. This is where the coffee is warehoused and eventually inspected with the defective beans sorted out. The remaining beans are then milled in a huge machine (a process in which the thin inner skin is husked from the beans) before they are sampled for final quality control. The pix below show the various step of this process, from warehousing and milling to sample roasting and tasting. 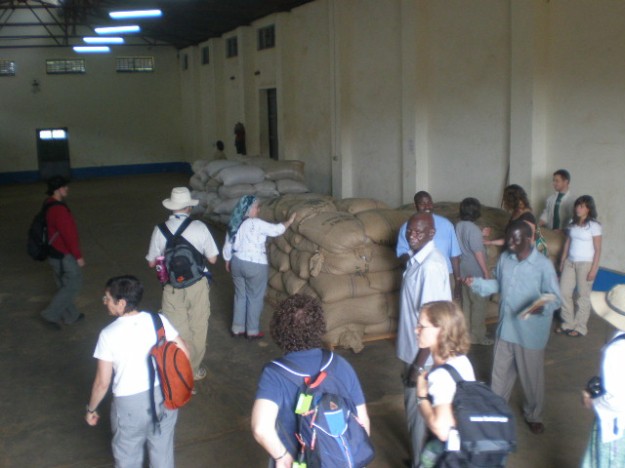 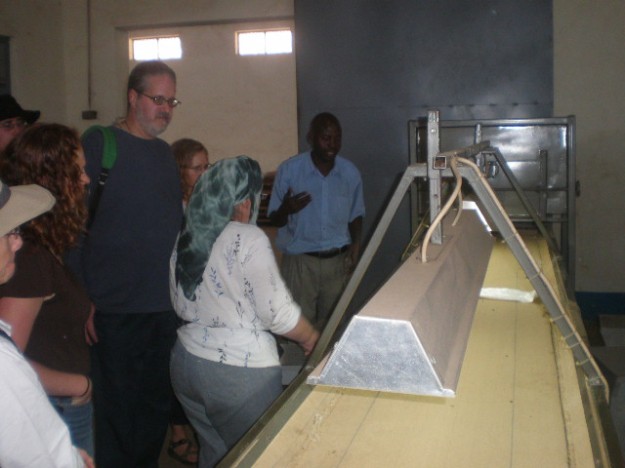 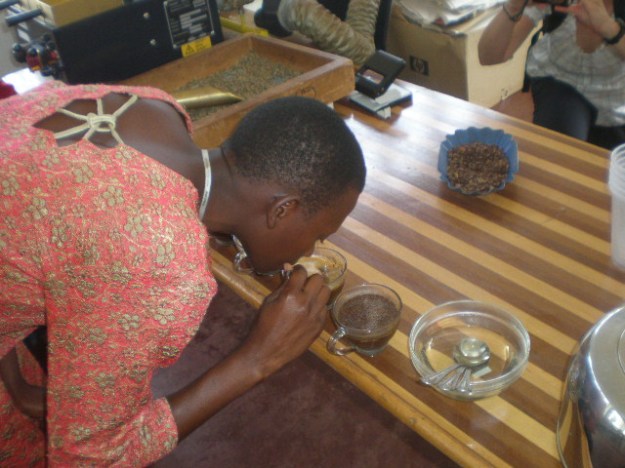 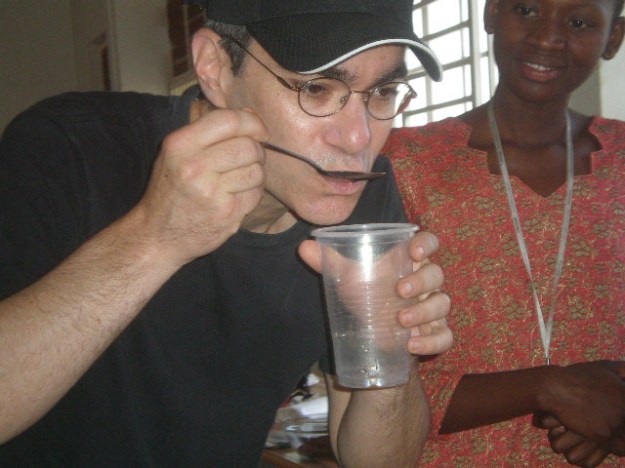 After lunch we attended a gathering of Peace Kawomera farmers who were attending a tutorial on organic farming by agriculturist John Bosco (pix below). The interplay was fascinating and impressive. The level of commitment of the farmers to their work – as well as their desire to learn and succeed – runs quite deep.

For our final meeting of the day, we met with the board of Peace Kawomera (below). If we learned annything with our soujourn with the coop, it was how deeply these farmers are committed to one another and their community. Coffee farming can only succeed with in a powerful subsystem of relationships and social connections. For the members of Peace Kawomera, their devotion to interfaith cooperation and sustainable development is no less powerful. We are bringing home so many profound lessons as a result of our soujourn in Uganda.

One more post to go. I’ll report on a visit to two primary schools supported by the coop and offer some final thoughts.

1 thought on “Peace Kawomera in Action”