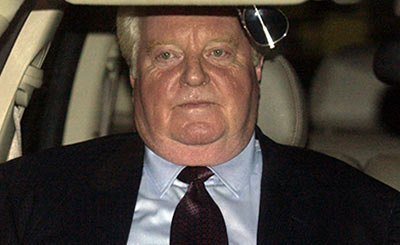 Here in Chicago, a decades-long shandeh may finally be coming to an end: US Attorney Patrick Fitzgerald announced today that former Police Commander Jon Burge (above) has been arrested and charged with two counts of obstruction of justice and one count of perjury for denying his department tortured suspects in their custody.

According to witness allegations, Burge led the torture of criminal suspects for two decades, coercing dozens of confessions with fists, kicks, radiator burns, guns to the mouth, bags over the head and electric shock to the genitals. Burge was suspended by the police department in 1991 and fired in 1993, but, amazingly, was never charged with a crime.

Just to compound the outrage, Burge had since retired to Florida to spend his golden years boating and fishing while the city of Chicago paid for his pension and legal fees.  While the statute of limitations has run out on the torture, there is some satisfaction in knowing that Burge could still be brought to justice for lying about it to prosecutors decades later.

In a press release, the Jewish Council on Urban Affairs called Burge’s arrest “a remarkable victory for all who have vigorously stayed the course in seeking justice for the victims of the torture,” adding:

We now call on the City of Chicago to cease it’s pension payments to Burge and it’s support for his legal defense. Justice is long overdue. We are gratified that action has finally been taken and the prosecution of Burge can commence. We applaud all who have worked so tirelessly to bring the Burge case to justice.

To learn more, check out this archive from the Chicago Tribune as well as these reports from the People’s Law Office, who have been doggedly seeking justice for Burge’s victims.

1 thought on “Finally, Justice in Chicago”