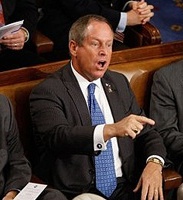 According to the Jewish calendar, Elul is the month where we are bidden to apologize to those whom we may have wronged in the past year. So in this, our season of apologies, I was especially interested in hearing the how Rep. Joe Wilson would say “I’m sorry” to Obama  for publicly calling him a liar during his address to Congress last Wednesday.

Indeed,  politicians are notoriously bad at the art of the public apology.  Witness this whopper from Assistant US Attorney Kenneth Taylor who referred to potential jurors in the eastern Kentucky mountains as “illiterate cave dwellers” back in 2003:

The comment was not meant to be a regional slur.  To the extent that it was misinterpreted to be one, I apologize.

(BTW: If this kind of thing is your cup of tea, I highly recommend the book “My Bad: 25 Years of Public Apologies and the Appalling Behavior That Inspired Them” by Paul Slanksy and Arleen Sorkin.)

Though Wilson’s outburst was undeniably appalling, I would personally say that his subsequent apology actually ranked fairly high on the “Elul-scale:”

This evening I let my emotions get the best of me when listening to the President’s remarks regarding the coverage of illegal immigrants in the health care bill. While I disagree with the President’s statement, my comments were inappropriate and regrettable. I extend sincere apologies to the President for this lack of civility.

As I see it, Wilson gets high marks for apologizing immediately (the same evening), for apologizing directly to Obama, and for not equivocating (i.e. “I’m sorry if I offended.”)  I would also add, though, that he brought down his score somewhat for the qualifier: “while I disagree with the President’s statement…”

Saying “I’m sorry” isn’t as easy as it seems. If you’re looking for some good straightforward guidelines for Elul, here are some tips from ethicist Bruce Weinstein (aka “Bruce the Ethics Guy”):

• Admit your mistake quickly and take personal responsibility for it. Don’t say “We made a mistake” when you mean “I made a mistake.”

• Apologize first to the person you have wronged. That is the person who matters most.

• Speak from the heart. An insincere apology is as bad as no apology at all. People can tell when you really mean it, even if you think you’re a good actor and can fool everyone.

• Realize that “sorry” is just a word. For that word to be meaningful, you must do your level best to avoid repeating the mistake. This means coming up with a strategy and sticking to it.

• Understand that a meaningful apology is a sign of integrity, not weakness. Anyone can blame others, or deny that he or she did anything wrong, or lie about what really happened. Only a strong, self-possessed person can own up to their mistakes, and only such a person commands true respect.

• Don’t be afraid to ask for help. If you can’t do something well on your own, invite others to work with you on the problem. If the problem is beyond your grasp, consider asking someone else to take it on, if it is appropriate for you to do so.

4 thoughts on “The Season of our Apologies”