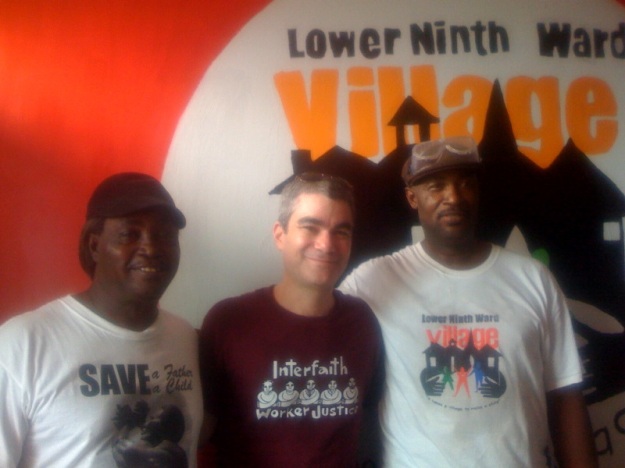 We spent the day volunteering at the Lower 9th Ward Village – a community-led, community-driven neighborhood center that opened almost immediately in the wake of Katrina. It was founded by Mack McClendon a former telephone technician who originally had his eye on the large abandoned facility as a place to store and work on old cars. After Katrina, Mack acquired the property with his mind on a deeper purpose: to build a community center to serve the dislocated citizens of the Lower 9th, complete with a gymnasium, job training programs, a recording studio, a dining room, computer lab for youth, and free meals for the homeless.

Mack is nothing if not a visionary. Though he is the leader of a neighborhood community center, he addressed us with the passion of a preacher. He spoke movingly of the dislocation suffered by the citizens of the Lower 9th, how his community is struggling to regain its footing, and how he discovered his own true purpose following the devastation of Katrina. His plans for the Lower 9th Village are ambitious to be sure, but it is impossible not to be awed at what he and his fellow organizers have accomplished in such a short amount of time. (That’s me above, with Mack on the left and his brother Joe on the right.)

Our group helped Joe organize a huge mass of supplies and equipment that had been donated to the center: lots of hauling, sorting and restocking in a large warehouse-like space that will eventually serve as a basketball court. Some of us also did a little bit of carpentry – that’s my son Jonah below helping Joe build storage bins for their sports equipment. 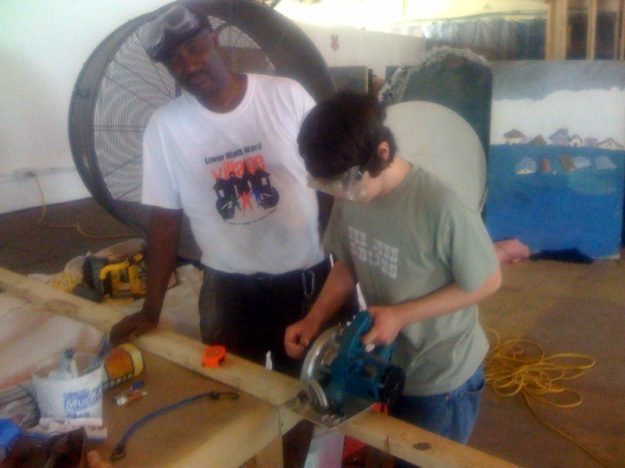 The center’s computer lab already has nine internet-equipped computers and they also house an impressively stocked library. Mack’s short-term plan is to provide A/C for these rooms and to complete a lounge/recording studio. In its short life, the Lower 9th Ward Village has already become a valuable resource for neighborhood youth – and its difficult not to be inspired by its huge potential to serve the citizens of this community.

If you’d like to donate to their effort, visit and join their Facebook group. You can get your name/s inscribed on a brick for a donation of $100.00 or $200.00. I can personally attest it’s a simple but powerful way to support community rebirth in New Orleans.