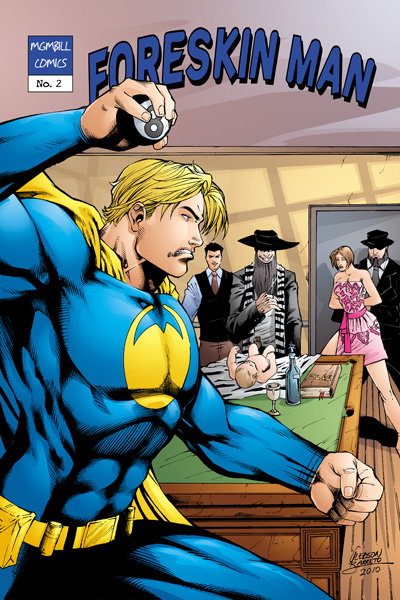 Though I’m well aware that the practice of circumcision has been facing growing resistance over the past several years, I was fairly bowled over by the news that San Francisco is putting a proposal before voters that would make it a misdemeanor to perform circumcision on a male under the age of 18. (My own hometown of Santa Monica also flirted with a similar ballot measure, but has since withdrawn it from consideration.)

As a rabbi and the father of two (circumsized) sons, I’ve been following the press commentary on this one with some interest. Some thoughts:

It’s certainly true that some of the anti-circ activists (aka “intactavists”) behind this measure are kooks. (Exhibit A: Matthew Hess, who publishes a comic book about a handsome, blond superhero named “Foreskin Man,” who battles “Monster Mohel” – a bearded, black-hatted villain who wields bloody scissors.) Having said this, I think it’s unfair and wrong to tar all supporters of this initiative as anti-Semites or zealous nutcases.

Witness, for instance, the opinion of blogger Freddie deBoer, who makes what I find to be a reasonable and well-articulated argument against male infant circumcision in a democratic society:

People can practice their religion all they want, as long as they are not trampling the rights of others in doing so. That is a settled question in this democracy. Your religion does not permit you to force your daughter to wear a headscarf – and a headscarf, at least, can be removed. Few things are odder to me than the spectacle of atheist liberals arguing to continue a strange religious ceremony that is forced upon people who are completely unable to resist or understand it, and which has permanently altering consequences…

Belief in individual sovereignty over the body is incompatible with infant circumcision. If you want your child to be circumcised, wait until he is old enough to understand the procedure and the choice, present the evidence, and let him choose. If he says no, he can always change his mind. Making the decision to circumcise in his infancy ensures that he will never have a choice at all.

Whether or not you’re convinced by his argument, there are many important issues to consider in this complex debate (the collision of religious rights vs. children’s rights, the medical pros and cons of male infant circumcision, to name but two.) I’m also well aware that the essential Jewish rationale for brit milah (i.e. that the Jewish people has practiced it from time immemorial to mark its covenant with God  and that being uncircumcised sets boys/men apart from the rest of the Jewish community) is becoming less and less compelling for increasing numbers of Jewish parents.

Actually, deBoer’s point about “atheist liberals” might well be broadened to include religious liberals like us Reconstructionists.  Indeed, I’ve certainly been asked by more than one congregant why, if we believe in reconstructing Jewish ritual in accordance with changing attitudes and mores, do so many of us consider circumcision off limits?

It’s a fair question. As I rabbi, I’ve come to fully respect Jewish parents’ good faith decisions on this issue. I’ve already done several covenant ceremonies for uncircumcised male babies – and fully suspect that I’ll be officiating at increasing numbers of such rituals in the future.

Here’s an interesting collection of pro and con articles on the subject from New York Magazine. I’m very interested in hearing your thoughts on this one…