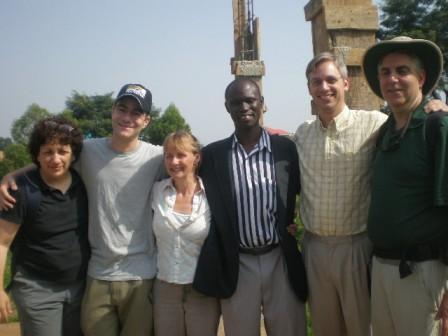 Today was another full day for our group. It was completely devoted to a visit to the Foundation for the Development of Needy Communities (FDNC) – an NGO that JRC visted three years ago during our first Africa delegation.

In April 2005 JRC was the first group hosted by FDNC, on a trip made in collaboration with American Jewish World Service. (You can read excerpts from my travel journal on the JRC website). The visit was a transformational one for us – and we just knew that whenever we returned to Africa we would meet again with our friends at FDNC. Indeed, several members of our current delegation were part of the original visit in 2005. (That’s us above in a pic taken today: from left to right: Debbie Wolen, me, Elaine Waxman, FDNC founder Samuel Watalatsu, Robert Israelite and Dan Litoff).

I’ll put it simply: if anyone asks you for a definition of “sustainable development,” just point to FDNC. Through Samuel’s inspired leadership, FDNC has grown into a model of self-reliance and grassroots sustainable development for the most impoverished communities of Eastern Uganda. They are particularly adept at developing strategies that promote community empowerment in the critical areas of vocational training, women’s rights, health/AIDS awareness and music/dance education.

During our first visit, we stayed for a week in the FDNC vocational school located in Nantandome Village, an impoverished rural area not far from Mbale. Living and working in this environment had a profound effect on our group. Among other things, we helped with construction of a classroom – we well recalled how painstaking it was to mix the cement for the mortar. Water had to be hauled in jerry cans from a river half a mile away and the mud bricks were made by hand and baked in the sun.

Just three short years later, the transformation of the area is profound. The classrooms of the school are complete and the grounds are beautifully landscaped. They are currently being served by numerous volunteers (we met teenagers on an AJWS service program as well as interns from as far away as Spain and Japan). The school no longer has to haul their water in from the river – they now have large tanks that collect rain water. They also have an ingenious brick making device that makes mud bricks quickly that require a minimum of mortar.

FDNC is clearly flourishing, serving many more students from the surrounding districts and they are currently in the midst of building a new headquarters for their operations in Mbale. It was deeply inspiring for us to witness the fruits of their labors – and how powerfully they have impacted their community. 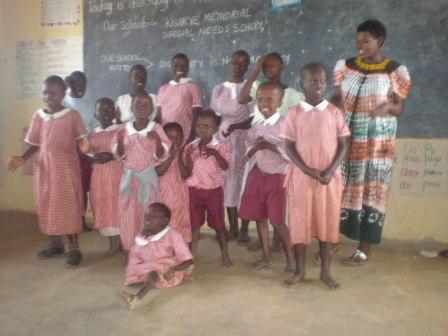 In the morning we toured the vocational classes, which include hairdressing, computer skills, tailoring and masonry/carpentry. We also visited with an inspiring new educational program for special needs children (above) which is virtually unprecedented in Uganda. (The writing on the board in back of the children reads “Disability is not Inability.”) We also made a special donation of supplies to the school, which included some hula hoops courtesy of the Waxmans. (Below you can see FDNC vocational school director Walter Urek-Wun trying one out). 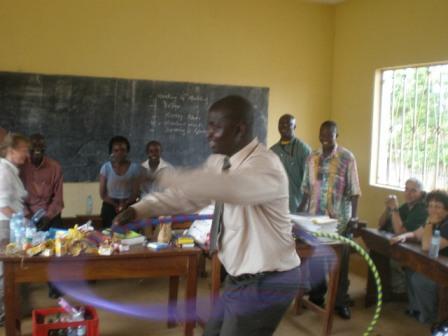 In the afternoon we visited the village of Wapando, one of the many nearby communities served by FDNC (bottom pic). They received our group joyfully, singing songs and dancing with us – and we reciprocated with a few rousing rounds of “Oseh Shalom.” They also cooked and served us a full lunch, an almost overwhelmingly generous gesture under the circumstances.

Our day ended back at the vocational school, where young people from the FDNC brass band and a traditional dance group performed for us for over two hours as the sun set behind them. Children and families from the area turned out in droves for the occasion as did numerous volunteers and we all helped cheer the performers on. By the end of a cathartic day, we were virtually spent – and deeply moved by what can be accomplished by people so thoroughly devoted to their community.

Tomorrow we’re going to spend the day with our good friends from the Mirembe Kowamera interfaith fair trade coffee coop. There’s much more to come… 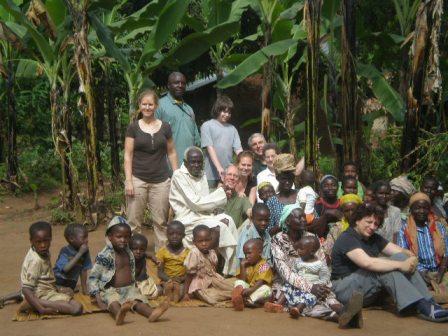 1 thought on “Return to Nantandome”