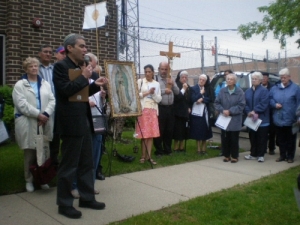 Some rare good news in the quest for compassionate immigration reform out here in Illinois:

Thanks to the unanimous passage of the Access to Religious Ministry Act in both state houses this past December, detained immigrants will now have the same access to clergy as those imprisoned for other crimes.  Up until now, undocumented immigrants awaiting deportation in Illinois jails have been restricted to clergy visits of two hours or less per month.

In addition to representing a clear victory for freedom of religion, this new access will help us shine a brighter light on conditions in ICE detention facilities.  The law is scheduled to go into effect in June and The Trib  has just reported that volunteer lay-clergy training began yesterday in Chicago. Major kudos to bill-sponsor Sen. Iris Martinez and the inspirational, indefatigable Sisters of Mercy (above) who led the fight for the passage of the bill.