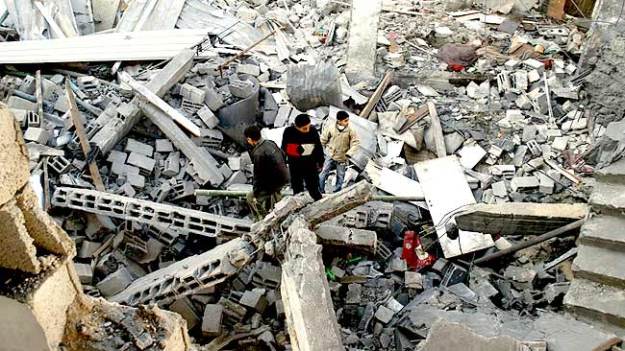 Two prominent Israeli columnists ask: why are Israelis so eager to pitch in to the rescue effort in Haiti and yet show such little concern over the dire humanitarian crisis they’ve helped to create just a few kilometers away in Gaza?

(The) remarkable identification with the victims of the terrible tragedy in distant Haiti only underscores the indifference to the ongoing suffering of the people of Gaza. Only a little more than an hour’s drive from the offices of Israel’s major newspapers, 1.5 million people have been besieged on a desert island for two and a half years. Who cares that 80 percent of the men, women and children living in such proximity to us have fallen under the poverty line? How many Israelis know that half of all Gazans are dependent on charity, that Operation Cast Lead created hundreds of amputees, that raw sewage flows from the streets into the sea?

The disaster in Haiti is a natural one; the one in Gaza is the unproud handiwork of man. Our handiwork. The IDF does not send cargo planes stuffed with medicines and medical equipment to Gaza. The missiles that Israel Air Force combat aircraft fired there a year ago hit nearly 60,000 homes and factories, turning 3,500 of them into rubble. Since then, 10,000 people have been living without running water, 40,000 without electricity. Ninety-seven percent of Gaza’s factories are idle due to Israeli government restrictions on the import of raw materials for industry. Soon it will be one year since the international community pledged, at the emergency conference in Sharm el-Sheikh, to donate $4.5 billion for Gaza’s reconstruction. Israel’s ban on bringing in building materials is causing that money to lose its value.

Humanitarian disasters around the world bring out the best in Israel and in Israelis. The horrific devastation caused by the earthquake in Haiti and the scenes of unbearable human suffering brought about an immediate enlistment of both civilian and public efforts to come to the aid of the poorest nation in the Western hemisphere…

But what about the humanitarian disaster in our own backyard caused in a large part by our own doing? What about Gaza? More than 1.5 million people are living in total poverty, without sanitary drinking water, under an economic and physical siege, locked in what could easily be called the world’s largest prison. While we ask to see in all of the gory details, all of the destruction including hundreds of corpses on the streets of Port-au-Prince, we wish to see none of the human suffering of our Palestinian neighbors in Gaza where we literally hold the keys to the end of their suffering.

27 thoughts on “On Haiti Remembered and Gaza Forgotten”