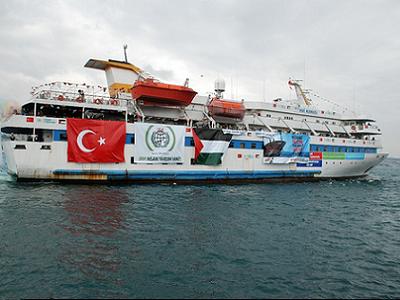 The bottom line is that Israel raided these ships with commandoes, and the end result was a great deal of needless bloodshed. And apparently, according to the IDF spokesperson, as reported by journalist Gregg Carlstrom, they couldn’t even wait to do it until the ships had passed out of international waters, which makes it, if no explanation is forthcoming, an act of piracy as well.

Israel crossed a line today, in a way not dissimilar (though certainly of a much smaller scope, thankfully) to the line they crossed in their massive attack on Gaza in 2008-09. Whatever Israel’s detractors have said over the years, this incident, like Operation Cast Lead, was far beyond anything Israel has done in the past.

This was a shocking massacre, and there’s no way to pretty that up. These were people engaged in direct action of civil disobedience. True, the siege on Gaza should simply be lifted, but being that it’s there, yes, Israel can be expected to take action to stop the flotilla. But this doesn’t just go above and beyond and justification, it zooms light years past it.

Ashley Bates reporting on the reaction inside Gaza:

Many of the International Solidarity Movement activists living in Gaza gave interviews with the press, including Bianca Zimmit, an activist from Malta who was shot in her thigh by Israeli troops during a demonstration against the buffer zone last month. Here’s the link to a previous blog post I wrote about this incident and here’s the link to a blog post I wrote about a Palestinian demonstrator who was killed the week after Zimmit was shot.

“I’m surprised that Israel would go this far with internationals,” Zimmit said… “The reality is that they are doing this sort of thing every day with Palestinians—farmers and fishermen are killed every day….I don’t know why [Israeli citizens] would oppose these ships. Because they don’t understand what’s happening? Because they don’t understand the daily reality of the siege? The siege hurts the people, not the [Hamas] government. The poor people are bearing the brunt and are the hardest hit.”

The final word goes to the always eloquent Emily Hauser:

What matters is the blockade they were symbolically trying to break.

16 thoughts on “Blogosphere Reactions to the Gaza Flotilla Tragedy”