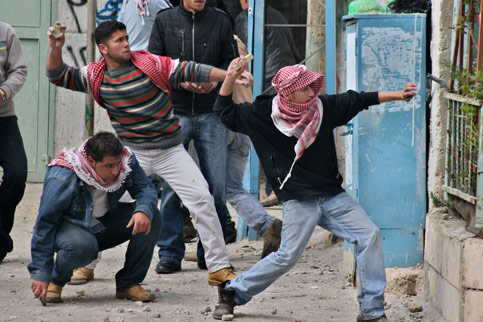 This assertion was even made by the liberal NY Times columnist Nicholas Kristof, who filed several reports on his recent trip to Israel/Palestine. Here is his description of his experience at one of the weekly nonviolent demonstrations in Bi’lin:

Most of the marchers were Palestinians, but some were also Israeli Jews and foreigners who support the Palestinian cause. They chanted slogans and waved placards as photographers snapped photos. At first the mood was festive and peaceful, and you could glimpse the potential of this approach.

But then a group of Palestinian youths began to throw rocks at Israeli troops. That’s the biggest challenge: many Palestinians define “nonviolence” to include stone-throwing.

Soon after, the Israeli forces fired volleys of tear gas at us, and then charged. The protesters fled, some throwing rocks backward as they ran. It’s a far cry from the heroism of Gandhi’s followers, who refused even to raise their arms to ward off blows as they were clubbed.

Does stone-throwing – which is invariably carried out by angry, frustrated youths – necessarily nullify the nonviolent nature of these demonstrations? For Kristof, who sets the bar at highly principled Ghandian nonviolent resistance, clearly the answer is yes. But according to nonviolence experts, it may not quite be that simple.

In this regard, I highly recommend a trenchant and extremely thorough reasearch paper entitled “The Road to Nonviolent Coexistence in Palestine/Israel” written by Michael N. Nagler, PhD., Tal Palter-Palman, and Matthew A. Taylor of UC Berkeley’s Peace and Conflict Studies program.  Among other things, they point out that the role of stone throwing has been discussed and debated by Palestinians as far back as the First Intifada in 1988:

Stone throwing was one of the more controversial aspects of the Intifada, mainly practiced by Palestinian youths age 10-20 (called the shabab). Some Palestinians have argued that stone throwing is more an act of defiance than an intention to injure (the literal meaning of himsa, violence), saying that stones (in most cases) cannot hurt well-equipped helmeted soldiers. The shabab resort to stone throwing to protest the presence of the army on their lands. For Palestinian youngsters suffering from a deep feeling of humiliation and hopelessness, this simple yet concrete act of resistance is often a way to survive psychologically, by reclaiming a feeling of empowerment in an otherwise forlorn and depressive environment. Accordingly, different scholars note that stone throwing falls into a gray area between violence and nonviolence. Dr. Abu-Nimer of American University refers to it as nonlethal force or unarmed resistance.

However it is described, and whatever the motives of the youth who engage in the activity, unfortunately it does have a real potential to injure. For instance, during the time we visited the Holy Land in the summer of 2005, one Israeli soldier reportedly lost use of an eye due to a stone. Even if such incidents are rare, the media tends to focus on them, leading to misconstrual of the movement by the ‘reference publics.’

On the other hand, a well-known right-wing Israeli military spokesperson and veteran of the first Intifada recently stated at a public event that he had respect for the kids who threw stones at him, because he understood that they were not out to hurt him, but simply send a message: get off our lands. (He directly contrasted that with the violence of the second Intifada.) In assessing the effect of stone throwing, we can recognize that those who are the targets are likely to perceive the act in different ways: this is a difficulty with all symbolic acts.

Bil’in’s demonstrations have taken place every Friday for the past two years and represent a complex mix of principled (Gandhian) nonviolence, strategic nonviolence a la Gene Sharpe, and at times stone throwing. The shabab at times throws stones while standing behind the peaceful demonstrators — usually of the older generation, who tend to disapprove of the stoning. This debate takes place during rallies and everyday life. After one of the weekly demonstrations in July of 2005, for example, a long, meaningful and very-much-needed discussion took place between Israelis, Palestinians, and international activists about stone throwing in particular and nonviolence in general. Some of the activists argued — correctly, in our view — that stone throwing provokes the army to use tear gas, rubber-coated bullets, and live ammunition. Additionally, they stated that the violent conclusion of each demonstration is the only part that gets media coverage, and draws public attention away from any meaningful discussion about the issue of the wall. In conclusion, although the village council affirmed a desire to stop stone throwing, they simultaneously justified and understood the youths’ need to release their anger through throwing stones.

My two cents? I believe that the Palestinian nonviolent resistance movement has deep historical roots – and that its current growth is significant and undeniable. I also believe it is all too easy to dismiss its significance by pointing to the presence of frustrated stone-throwing youths at demonstrations.

Yes, as Kristof points out it will be a “challenge” for Palestinian popular movement leaders to reign in the stone-throwers. But the challenge is just as equally Israel’s to understand that no matter how it tries, it will never break Palestinian resistance through the means of brutal military force.

12 thoughts on “Is it “Nonviolence” When Stones are Thrown?”