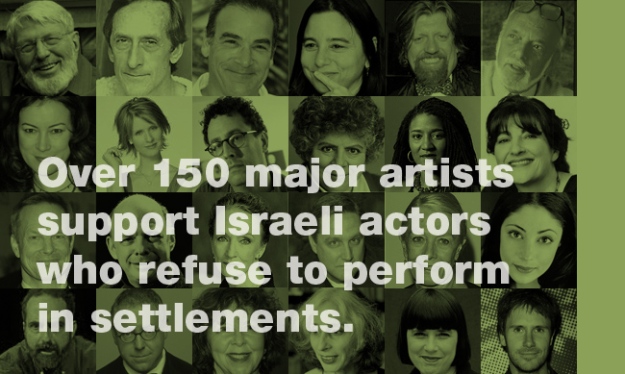 Last week, fifty Israeli actors, directors and producers publicly released a letter saying they would not perform in a new multi-million dollar theater center in the West Bank settlement of Ariel and that they would continue to do so until there was an Israeli-Palestinian peace agreement.

Their stand drew immediate outrage from the Israeli government. PM Netanyahu, Culture and Sports Minister Limor Livnat and Finance Minister Yuval Steinitz responded by threatening to deny government funding to any  cultural institutions that refuse to hold performances in the Occupied Territories. Netayahu released a statement accusing the Israeli artists of joining an “international delegitimization campaign” adding that “the last thing the state needs to do is fund bodies that are promoting boycotts from within.”

These events had a powerful and galvanizing effect within Israeli society. Almost as immediately, over 150 leading Israeli academics and writers (including authors Amos Oz and David Grossman) came to the defense of the artists. The boycott quickly became a central issue of discussion in the Israeli press – for its part, Ha’aretz’s staff editorial stated:

Theater actors are not marionettes, and cultural coercion of artists who fear for their livelihood does not befit a freedom-loving country. Cultural and academic institutions that receive budgetary support from the state do not owe it obedience in return. On the contrary, the government should be thankful for the existence of institutions that constitute such a vital interest for Israeli society.

Now it appears the struggle has moved to the United States. I’m so incredibly proud to see that Jewish Voice for Peace has now organized a support statement by over 150 American and European theater and film professionals – including Mandy Patinkin, Theodore Bikel, Eve Ensler, Tony Kushner, Cynthia Nixon, Ed Asner, among others.

Here’s the text of the statement:

Most of us are involved in daily compromises with wrongful acts. When a group of people suddenly have the clarity of mind to see that the next compromise looming up before them is an unbearable one  — and when they somehow find the strength to refuse to cross that line  —  we can’t help but be overjoyed and inspired and grateful.

It’s thrilling to think that these Israeli theatre artists have refused to allow their work to be used to normalize a cruel occupation which they know to be wrong, which violates international law and which is impeding the hope for a just and lasting peace for Israelis an Palestinians alike.  They’ve made a wonderful decision, and they deserve the respect of people everywhere who dream of justice. We stand with them.

This is big. Indeed, as the government’s apoplectic response clearly demonstrates, it represents much more than a mere symbolic stand. To stand up against performing in Ariel, which Netanyahu has described as the “Capital of Samaria,” means to stand up against the very heart of Israel’s settlement enterprise.

It is also the most significant internal cultural boycott to ever take place in Israel – and the support of the artistic community around the world shows that there is a growing constituency of prominent figures who are willing to publicly speak out against Israel’s impunity.

In other words, the artistic community is stepping up and going to the places to which our politicians seem unwilling to go. Bravo!

8 thoughts on “Israeli Artists Say No to Performing in Ariel – and Support is Growing!”