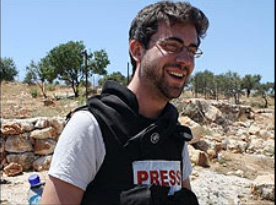 Jared Malsin served as the chief English editor of the Palestinian news agency Ma’an. He spent two and a half years reporting from the West Bank, based in Bethlehem.

In January 2010, while returning from a vacation in Prague, the Israeli government detained Malsin at Ben-Gurion airport after questioning him about his allegedly “anti-Israeli” political views, Palestinian contacts, and news articles authored “inside the territories.” Malsin spent a week in jail before he was deported to the US.   His deportation was condemned by the head of the International Federation of Journalists as “an intolerable violation of press freedom.”

Since October 2010, Malsin has been reporting regularly from Gaza as a free lance journalist.

Here’s Malsin in an interview with radio journalist Christophen Lydon:

If you’re living in the West Bank or Gaza, your water gets shut off for a week or ten days at a time, in the summer, routinely. Which means that if you live in a refugee camp in Bethlehem, for a week or ten days in the summer you can’t wash yourself; you can’t wash your children. You can’t take a shower. You can’t cook food. It’s incredibly dehumanizing, but it’s one of these issues you just don’t hear about because there are no explosions going on. It’s one of these daily lived ways that people live occupation. And that’s what I think the real meaning of it is… Those are the stories I’m interested in.