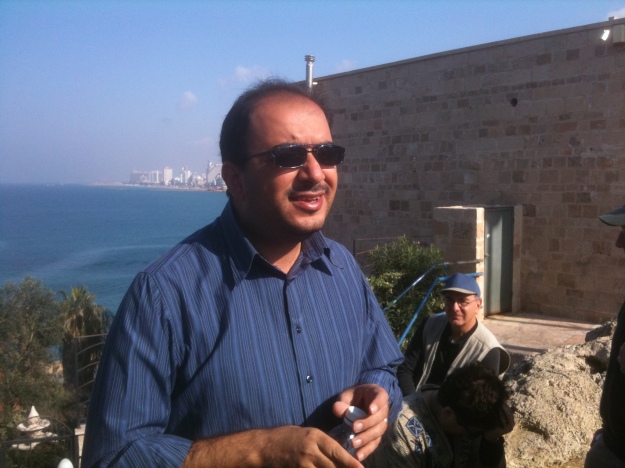 Friday began with a trip to Jaffa – once a thriving Arab port city, now part of the Tel Aviv municipality. Jaffa was emptied of its residents in 1948 and today “Old Jaffa” is has been turned into a quaint artist’s colony. For most tourists who frequent Jaffa’s galleries and restaurants today there is little indication of the rich Palestinian cultural history of the city. And even fewer have any idea that there is a Jaffa slum neighborhood, Ajami, which is populated by internally displaced Palestinians and their descendants.

Our tour of Jaffa was led by Sami Abu Shehadeh (above), a Jaffa historian and community activist who was recently elected to the Tel Aviv/Jaffa city council. Sami began by explaining Jaffa’s history as port city and by recounting the long line of occupying forces that have left their mark on the city over the centuries. He then gave us a view into the Palestinian life of a place that only exists today in vestiges: a mosque that is now a fish restaurant, Arab homes that have been converted into stores and high scale art galleries, etc.

Our tour of Ajami was also intensely eye opening. Sami described how in 1948, the majority of Jaffa’s 100,000 Palestinians were expelled or fled in fear for their lives, crowding onto ships that took them to refugee camps in Gaza and Lebanon. Others traveled by foot to camps in Nablus or Jordan. The remaining 4,000 were rounded up and brought to Ajami, which was literally turned into a ghetto surround by fences and guard dogs. Sami said that his own grandfather, who used to be able to drive from Jaffa to Beirut, needed military permission to leave the neighborhood.

According to Sami, the trauma experienced by the Palestinians of Jaffa was really threefold. The first was the total destruction of their social reality as a result of their expulsion from their homes and the lives that they had known. The second trauma was economic: after their expulsion, the new Israeli authorities passed the Absentee Property Law of 1950, by which it could “legally” seize their properties. In many cases, these “absentees’” homes were their taken from them while they lived just a short distance away in their new ghetto.

The third stage of trauma Sami called “coexistence.” After the expulsion of Palestinians from their homes, the new State of Israel began absorbing thousands of new Jewish immigrants from around the world by placing them in seized Arab property. When all of the homes in Jaffa had been occupied, the Israeli housing authorities began dividing the homes in the Ajami ghetto into apartments and housed Jewish immigrants together with Arab families. Imagine, Sami said, if you were forced to live together with the very people who were now serving in the army, and quite possibly going own to kill your own family members in Gaza or Nablus before returning home to live with you under the same roof.

Our tour of Ajami also included a neighborhood that was undergoing heavy gentrification, with multi-million dollar beachfront homes, renamed by developers “North Ajami.” Sami pointed out the irony that many of these rehabbed Arab houses used to be home to poor fishermen who lived near the coast – and are now inhabited by embassy workers and billionaire businessmen.

Later in the afternoon, our group attended a demonstration in Silwan, the neighborhood in East Jerusalem that we visited on Wednesday.

There have been weekly demonstrations held in the East Jerusalem neighborhood of Sheikh Jarrah every Friday for almost two years to protest the ongoing evictions of Arab residents and occupation of their homes by Jewish settler groups. The Sheikh Jarrah solidarity movement sponsored Friday’s protest in solidarity with Adnan Ghaith, a community activist from Silwan who was recently handed a court order expelling him from Jerusalem for four months.

Below is a pic I took of of a young protester inside the Silwan peace tent. The peace tent has been standing since 2008 and has been slated for demolition by the Jerusalem municipality for being a “focal point for incitement.” 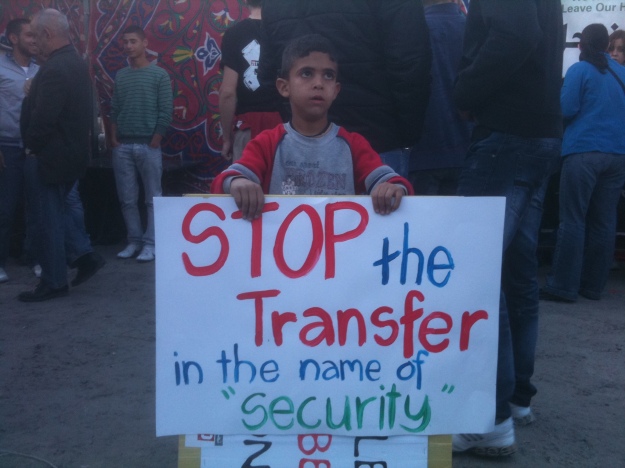 At the protest, I had the pleasure of running into peace activists Yonatan Shapira and Rami Elchanan (below). I met Yonatan last May when he visited Chicago and his activism has since become a huge source of inspiration to me. Both Yonatan (right) and Rami recently participated on the latest flotilla of boats attempting to break the siege of Gaza by bringing symbolic amounts of humanitarian aid to its citizens. (Click here to read more about their experience on the flotilla).

On Shabbat, Rami came to our hotel in East Jerusalem to speak together with our tour guide Aziz about their work in the Bereaved Parents’ Circle. I’ve written a great deal about this organization over the years, which I believe to be one of the most important peace and reconciliation groups in Israel/Palestine. Rami, who lost his fourteen year old daughter to a suicide bombing and Aziz, whose older brother died after being tortured in an Israeli prison as a teenager, both spoke movingly and openly about their pain, the anger, and their personal transformations as a result of their work in this amazing organization.

Later in the afternoon, we heard a presentation by Israeli journalist Orly Halpern, who, for my money is one of the gutsiest and most intelligent reporters on the Mideast conflict. Her talk on the pragmatism of Hamas was eye-opening to say the least. (And she did it all with her three month old Adam in a Snugli…) Check out Orly’s blog here.

1 thought on “Jaffa’s Bereavement Past and Present”