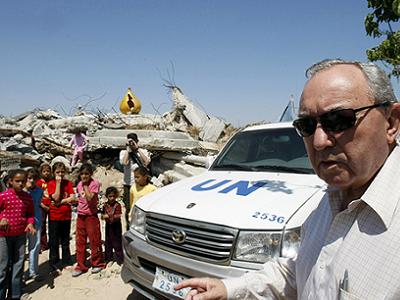 I usually try to stay current in my posts but alas, life invariably manages to intervene. Latest case in point: the now all-too-well-known Goldstone Washington Post, op-ed, which came out just as I was leaving to take my son on an extended college visit road trip. So even though this story is yesterday’s news by blogosphere standards, I’d like to weigh in with a few thoughts, belated though they may be:

Many are asking why Judge Richard Goldstone chose to “reconsider” his committee’s report nearly two years after it was presented to the UN Human Rights Council. In fact, Goldstone himself answers this question in the second paragraph of the op-ed: it was written in reaction to the recent release of a report by a UN commitee of experts — chaired by former New York judge Mary McGowan Davis — that followed up on the recommendations of the Goldstone Report.

But of course for most, it’s not quite that straightforward. Many have speculated that the somewhat conciliatory tone of the op-ed indicates that Goldstone, a lifelong Zionist, may be trying to make amends with Israel and the Jewish community. Indeed, the blogosphere has been positively rife with theories that explain the psychological rationale for Goldstone’s public “reconsideration.”

While interesting, this kind of speculation is ultimately fairly moot. Richard Goldstone himself has never been the issue here. What truly matters are the serious allegations his committee made regarding the events that took place during Operation Cast Lead in 2008-2009. And now: whether or not the new McGowan Davis Report has caused Goldstone to fundamentally recant these allegations.

In his op-ed, Goldstone found it significant that the McGowan Davis Report reported “Israel has dedicated significant resources to investigate over 400 allegations of operational misconduct in Gaza.” In particular, Goldstone felt this shed some light on the issue of “intentionality” – which many found to be the most damning finding of the Goldstone Report.

As Goldstone wrote in his op-ed:

While the investigations published by the Israeli military and recognized in the (McGowan Davis) report have established the validity of some incidents that we investigated in cases involving individual soldiers, they also indicate that civilians were not intentionally targeted as a matter of policy.

Goldstone went on to say that if Israel had cooperated with his commission during its initial investigation, he would have been able to clarify further the critical issue of whether the IDF intentionally targeted civilians or whether these were isolated incidents perpetrated by individual soldiers.

While this may well be true, the issue of intentionality is by no means resolved. In fact, the McGowan Davis Report makes it clear that it cannot determine whether or not civilians were intentionally targeted as a matter of policy until Israel carries out a properly independent and transparent (i.e., non-military) investigation.

From p. 12 of the McGowan Davis Report:

Therefore, the Committee remains of the view that an independent public commission – and not the (Israeli Military Advocate General’s) office – is the appropriate mechanism for carrying out an independent and impartial analysis, as called for in (the Goldstone Report), into allegations that high-level decision-making related to the Gaza conflict violated international law.

At any rate, the issue of intentionality is but one of the many disturbing allegations brought to light by the Goldstone Report. In a Washington Post op-ed yesterday, Jessica Montell, Director of B’tselem, correctly pointed out that even if Israel did not intentionally target civilians, there are any number of troubling allegations regarding the IDF’s behavior during Operation Cast Lead:

In the operation, according to rigorous research by B’Tselem, Israel killed at least 758 Palestinian civilians who did not take part in the hostilities; 318 of them were minors. More than 5,300 Palestinians were injured, over 350 of them seriously. More than 3,500 houses were destroyed, and electricity, water and sewage infrastructure was severely damaged. In many ways, the Gaza Strip has yet to recover from the unprecedented destruction this operation wrought.

The extent of the harm to civilians does not prove that Israel violated the law. But Israel has yet to adequately address many allegations regarding its conduct, including: the levels of force authorized; the use of white phosphorous and inherently inaccurate mortar shells in densely populated areas; the determination that government office buildings were legitimate military targets; the obstruction of and harm to ambulances.

In his only interview since his op-ed, Goldstone has stated he has “no reason to believe any part of the report needs to be reconsidered at this time.” Two other members of his original commission, Hina Jilani and Desmond Travers have both stated that they fully stand behind their findings as well.

However you choose to characterize Goldstone’s recent words, it is clear that he has not in any way recanted his commission’s report. Indeed, the fury with which Israeli politicians first received the Goldstone Report – and their vociferous insistence that it now be formally withdrawn – is the surest sign of its continuing moral power – and of the continuing need for Israel to conduct an independent, credible and transparent investigation of its actions during Cast Lead.

This was, after all, the most important recommendation of the Goldstone Report – and why, in my opinion, it still remains as relevant as ever.

10 thoughts on “Belated Thoughts on the Goldstone Op-ed”