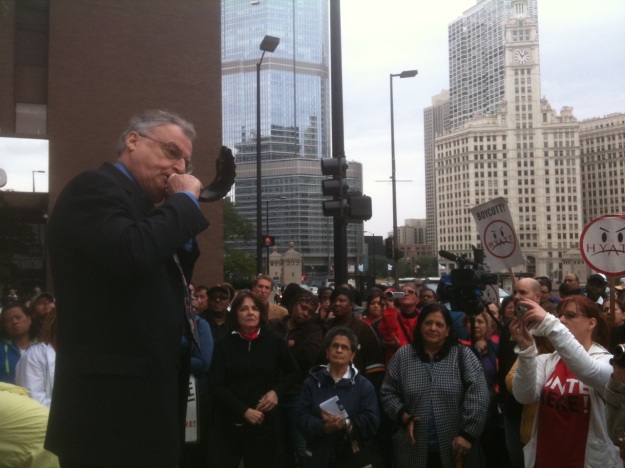 Today marked the end of a week-long strike at the Hyatt Regency Chicago and Hyatt Regency McCormick Place  held simultaneously with Hyatt workers in Los Angeles, San Francisco and Honolulu.  This morning I walked the picket line at the Hyatt Regency and had the honor of participating in an interfaith solidarity service with local Chicago clergy.  That’s me in the pic below, together with Rabbi Victor Mirelman (left) of West Suburban Temple Har Zion and Rabbi Larry Edwards (center) of Congregation Or Chadash. Above you can see Victor sounding the shofar in a dramatic start to our service. 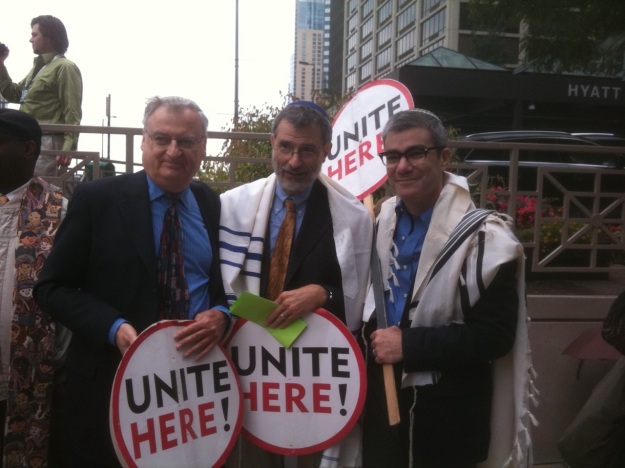 As I’ve written before, the situation facing Hyatt workers in many cities throughout the country is deplorable. Hyatt has eliminated jobs, replaced career housekeepers with minimum wage temporary workers, and imposed dangerous workloads on those who remain.  Although the strike will be over today, the boycott of eighteen Hyatt hotels nationwide continues.

Again, I encourage you to read “Open the Gates of Justice: A Clergy Report on Working Conditions at Hyatt Hotels” for more information.  The report contains the direct testimony of hotel workers themselves, who speak eloquently to the injustices they endure – as well as their desire only to be valued as workers for the important work they do for Hyatt hotels.

At the interfaith service today, I read an “Avinu Malkeinu” High Holiday prayer that I reworked in honor of the striking Hyatt workers. Click below to read:

Avinu Malkeinu, we stand with all workers, the ones who make our beds, serve our food, police our streets or teach our children;
Avinu Malkeinu, we will stand up against all those who would demean the sacred cause of worker justice.