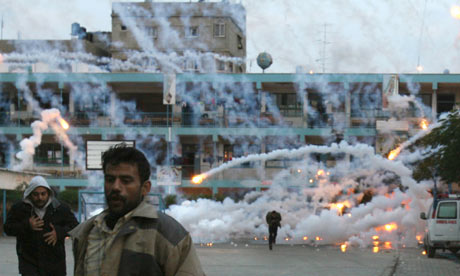 It’s the last day of Hanukkah and the third anniversary of Israel’s devastating military assault on Gaza. Although we are technically finished lighting candles, I’d like to suggest lighting one more tonight in commemoration of this tragic anniversary.

To this end, please read the post below, slightly adapted from a piece co-written by myself and Rabbi Alissa Wise for the JVP Rabbinical Council’s new blog, Palestinian Talmud:

On the morning of December 27, 2008, the sixth day of Hanukkah, Israel initiated a massive military assault against Gaza it called “Operation Cast Lead.”  The name of the operation was a reference to a popular Hanukkah song written by the venerable Israeli poet Chaim Nachman Bialik:  “My teacher gave a dreidel to me/A dreidel of cast lead.”

When Israel’s military actions ended on January 18, some 1,400 Palestinians had been killed. Among the dead were hundreds of unarmed civilians, including some 300 children.

Tonight begins the last day of Hanukkah—and we pause today to remember the lives lost three years ago, and the devastating blockade that continues to this day. Tonight, we invite you to light a ninth candle for Gaza.

As you gather to light the Hanukkah candles with your community and/or family, consider adding some moment of reflection on Gaza. You might include:

– Discussing how Hanukkah, the festival that enshrines the ongoing human struggle for freedom, the season that seeks to shed light on the dark places of our world, can be a time for us stand in solidarity with all who are oppressed.

– Researching the restrictions that continue to rob the people of Gaza of a life of normalcy and dignity. After all, Israel’s military assault occurred in the midst of a crushing blockade that Israel has imposed upon Gaza since January 2006. Despite Israel’s claims to the contrary, its blockade remains very much in force. You can find the most recent reports issued by Gisha – Legal Center for Freedom of Movement for information on the restrictions of movement for Gazans.

– Reflecting on the personal testimonies from Gazans who lived through Israel’s military assault indicate tragedy beyond human comprehension. Here is one such account – excerpted from Amnesty International’s 2009 Report, “Operation Cast Lead: 22 Days of Death and Destruction”:

After Sabah’s house was shelled I ran over there. She was on fire and was holding her baby girl Shahed, who was completely burned. Her husband and some of the children were dead and others were burning. Ambulances could not come because the area was surrounded by the Israeli army. We put some of the injured in a wagon tied to the tractor to take them to hospital. My nephew Muhammad (Sabah’s son) picked up his wife, Ghada, who was burning all over her body, and I took her little girl, Farah, who was also on fire. My nephew Muhammad-Hikmat drove the tractor and my son Matar and my nephews ‘Omar and ‘Ali also came with us and took the body of baby Shahed and two other bodies. Sabah and the other wounded were put into a car; other relatives were also leaving. We drove toward the nearest hospital, Kamal ‘Adwan hospital. As we got near the school, on the way to al-‘Atatrah Square we saw Israeli soldiers and stopped, and suddenly, the soldiers shot at us. My son Matar and Muhammad-Hikmat were killed. The soldiers made us get out of the wagon. I ran away with ‘Ali and ‘Omar, who had also been shot and were injured. Muhammad, Ghada and Farah were allowed to go on but only on foot and the soldiers did not allow them to take the dead.

This Hanukkah, please light an extra candle for Gaza.

1 thought on “Light One More Candle for Gaza”