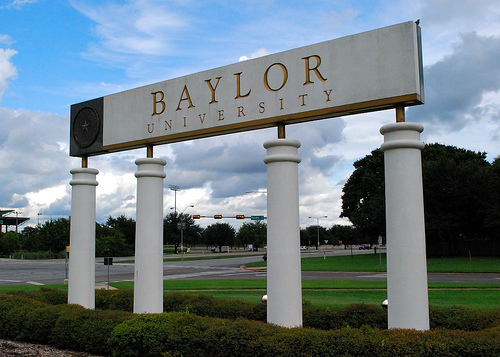 In a post last November, I implored readers to support the cause of Jewish Studies Prof. Marc Ellis, who is currently being investigated by Baylor University’s new Prez Ken Starr in what increasingly looks like an unabashedly political house cleaning. Well, the plot is thickening.

According to this very thorough investigative report in Religion Dispatches, Ken Starr (yes, that Ken Starr) in interested in transforming Baylor into a major player in the Big 12 conference – and attracting major money from conservative Christian sources. Needless to say, a brave and outspoken academic such as Marc Ellis stands in the way of Starr’s grand plans.

“With Ken Starr as the president now, Baylor is really looking to clean house,” one faculty member, who spoke on condition of anonymity, told RD. “Finally they have a president who is accessible to the broader business community and can bring in lots of money.” In his first year at Baylor, Starr raised nearly $35 million of the $100 million 3-year goal he’d set upon arrival…

“I think there is big money behind it,” hypothesized another faculty member. “I don’t think the [local] Jewish community is driving this—like ‘get rid of Ellis and we’ll give you money’—but I do think it would open up possibilities.” Remaking Ellis’ Center for Jewish Studies into a “pro-Israel” center, the faculty member added, could help Baylor attract grants and donations at a national level. “Marc is just in the way.” Given the growing popularity of Christian Zionism in the U.S., it’s just as likely, if not more so, that conservative Christian donations might be easier to elicit with Ellis out of the way.

In the meantime, the Middle East Studies Association has just issued a strongly worded letter of support for Prof. Ellis. If you would like to voice your support as well, click here.