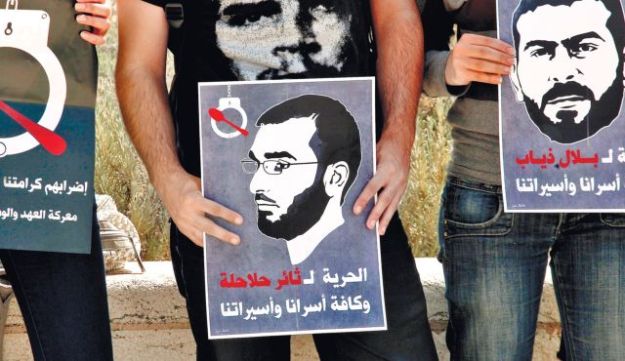 After nearly a full month of fasting, around 2,000 Palestinian political prisoners ended last night their mass hunger strike upon reaching an agreement with the Israeli Prison Service (IPS) to attain certain core demands…

This is heartening news to be sure, particularly for the families of the strikers.  But on an even deeper level, this deal is a testimony to the astonishing moral/political power of fasting in response to oppression.  As my colleague Rabbi Alissa Wise recently wrote:

I can not even begin to fathom the pain, the discomfort, the anguish of starving yourself to protest injustice. Their decision to take up this action surely was not taken up lightly, and neither, I imagine, (was) their decision each and every day to continue with the fast.

Nor can I think of any more basic or courageous form of resistance than the simple act of refusing food. For an eloquent, heartbreaking expression of this principle, look no farther than the widely published letter written by hunger striker Thaer Halahleh to his two year old daughter Lamar. (Halahleh hovered between life and death for weeks before ending his strike at 77 days):

When you grow up you will understand how injustice was brought upon your father and upon thousands of Palestinians whom the occupation has put in prisons and jail cells, shattering their lives and future for no reason other then their pursuit of freedom, dignity and independence. You will know that your father did not tolerate injustice and submission, and that he would never accept insult and compromise, and that he is going through a hunger strike to protest against the Jewish state that wants to turn us into humiliated slaves without any rights or patriotic dignity.

Hunger striking is, of course, is an ancient time-honored form of protest. And as a Jew, I’m particularly mindful that the Book of Isaiah passionately connects the act of fasting to the pursuit of justice:

Is not this the fast that I choose:
to loose the bonds of wickedness,
to undo the straps of the yoke,
to let the oppressed go free,
and to break every yoke?

Indeed, it is critical that we understand that the Palestinians’ “Battle of the Empty Stomachs” as part of this long and honorable tradition of nonviolent resistance. As we have seen from the events of the past several months, it has lasted so long largely because it is a tactic that works.

At the same time, however, it is imperative to bear in mind what has been accomplished and what has not.  While several specific demands regarding prison conditions have been met, Israel’s overall policy of administrative detention essentially remains in place. Adameer’s press release rightly noted this point:

Addameer is concerned that these provisions of the agreement will not explicitly solve Israel’s lenient and problematic application of administrative detention, which as it stands is in stark violation of international law.

In a recent blog post for +972mag, Palestinian journalist Omar Rahman also viewed this agreement in context of the overall Israeli/Palestinian power dynamic:

We must also remember that Israel holds all the chips. These hunger strikers have managed to pressure Israel into a level of accommodation, but only while people are focused on the issue. As soon as that attention dissipates, Israel is free to take back what it has offered. In the relationship between the occupier and the occupied, Israel is the Lord who giveth and taketh away. What will the Palestinians do? Stage another collective hunger strike only to repeat the process of give and take? The costs are simply too high to stage such a strike every time the need arises to challenge the system.

In the meantime, it seems to me, the most important outcome of the hunger strike campaign is the way in which it powerfully frames the ethical stakes of Israel’s occupation. As a recent Guardian editorial stated plainly, “Israel cannot claim the moral high ground while it is holding Palestinians without charge.”

For Jews, the “Battle of the Empty Stomachs” thus represents a profoundly critical challenge. Will we, who are the bearers of a tradition that bids us to call out oppression, find the wherewithal to stand with those who fast in response to their oppression by the Jewish state?

I don’t know how to say it any better than my colleague Rabbi Rachel Barenblat:

When I read anything which speaks ill of Israel and of Judaism, my heart aches. I do not want to hear these things about my coreligionists. But the answer is not to silence or ignore those who are speaking out. The answer is for my fellow Jews to live up to what is best in our tradition. Detaining people without trial, without informing them or their lawyers of the charges against them, is wrong. When the only Jewish government in the world makes those choices, we are all diminished.