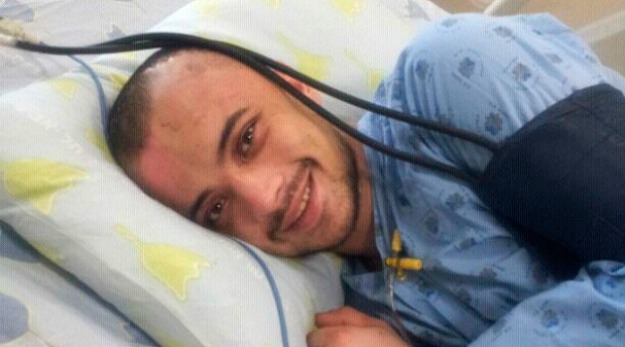 I’ve been thinking all day about a recent article in the Forward that documented the vicious beating of a 25 year old yeshiva student in Kiev – and the Jewish reactions it has engendered.

According to the article, Alexander “Aron” Goncharov left the hostel of Kiev’s Brodsky Synagogue on the second night of Passover and never returned. Yeshiva authorities found him the next day in hospital, barely alive after suffering massive head wounds.  A few days later, Goncharov was flown to a Tel Aviv hospital for emergency treatment and was put in a medically induced coma. When he awoke one week later, he said that his attackers had yelled “Yid” as they beat him.

Not surprisingly, the Israeli establishment was quick to make political hay out of the incident:

Israel’s chief rabbi Yona Metzger visited Goncharov on Holocaust Remembrance Day, underlining his new status as a symbol of contemporary anti-Semitism. Goncharov told Metzger that he hoped to immigrate to Israel, calling it “the safest place for Jews.”

What I found interesting, however, was reaction of many in Kiev’s Jewish community itself. While some attributed it to anti-Semitism, others flatly denied it:

“It has nothing to do with anti-Semitism,” said Yaakov Dov Bleich, rabbi of Kiev’s Podol Synagogue and one of several rabbis who claim the mantle of chief rabbi of Ukraine. “The fact he was taken to Israel will probably stop any [police] investigation in its tracks.”

I was also struck by this response:

Vyacheslav Likhachev, a researcher focused on racism, said there was little evidence that the attack was anti-Semitic. Likhachev, who has studied anti-Semitism in Ukraine for the Euro-Asian Jewish Congress for 10 years, told the Forward that anti-Semitic incidents have fallen in Ukraine in recent years…

“I don’t want to say there is no Nazi violence in Ukraine,” Likhachev hastened to say. But he said that Africans and Asians suffer much more than Jews. In an article published soon after the attack, Likhachev noted that on the same night Goncharov was injured, an African student was severely beaten. He said that the following week, a court case opened into a “racist pogrom” which resulted in four students from India, Azerbaijan and Turkmenistan being seriously injured.

Likhachev went on to point out that while Ukrainian President Viktor Yanukovych publicly condemned the attack on Goncharov, he “did not deem it necessary to make a statement on these crimes.”

And this for me is the rub: whether or not this was an act of anti-Semitic violence, what should be our response? For me the answer is clear: it is not to let anti-Jewish actions to drive us from our homes. And it is not to insist that Jews will only truly be safe if they retreat into a nation-state ghetto of their own making.

Rather, we must understand Jew-hatred as no different from any other form of prejudice.  And if we do agree that this is the case, then it would behoove us to find common cause with all minorities targeted with racism.

6 thoughts on “Anti-Semitism in Kiev? What is our Response?”