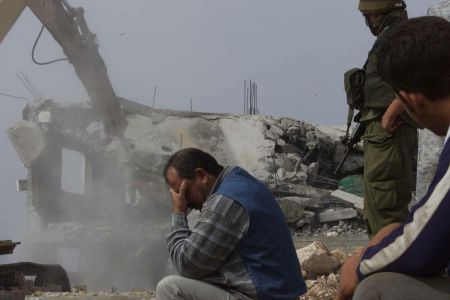 Cross-posted with The Palestinian Talmud:

The undersigned members of the Jewish Voice for Peace Rabbinical Council stand with our American Christian colleagues in their recent call to “make U.S. military aid to Israel contingent upon its government’s compliance with applicable US laws and policies.”

We are as troubled as our Christian colleagues by the human rights violations Israel commits against Palestinian civilians, many of which involve the misuse of US – supplied weapons. It is altogether appropriate – and in fact essential – for Congress to ensure that Israel is not in violation of any US laws or policies that regulate the use of US supplied weapons.

The US Foreign Assistance Act and the US Arms Export Control Act specifically prohibit assistance to any country which engages in a consistent pattern of human rights violations and limit the use of US weapons to “internal security” or “legitimate self-defense.”  The Christian leaders’ letter points out, in fact, that the most recent 2011 State Department Country Report on Human Rights Practices covering Israel and the Occupied Territories detailed widespread Israeli human rights violations committed against Palestinian civilians, many of which involve the misuse of US – supplied weapons such as tear gas.

It is certainly not unreasonable to insist that foreign assistance be contingent on compliance with US laws and policies. Mideast analyst MJ Rosenberg has rightly pointed out that during this current economic downturn, Congress has been scrutinizing all domestic assistance programs - including Social Security and food stamps - to ensure that they are being carried out legally in compliance with stated US policy.  Why should US military aid to Israel be exempt from the same kind of scrutiny?

While some might feel that requiring assistance to be contingent with compliance would compromise Israels security, we believe the exactly the opposite is true. As Israels primary ally, the US alone is in a place to create the kind of leverage that might challenge Israel to turn away from policies that impede the cause of a just peace for Israelis and Palestinians - and true security for all who live in the region.

As Jews we acknowledge that the signers of the letter, and the churches they represent, have ancient and continuing ties to the land of Israel just as we do, and that their concerns for the safety and dignity of Christians in Israel and in the occupied Palestinian territories is as compelling as our concern for the safety and dignity of Jews there.

We are troubled that several Jewish organizations have cynically attacked this faithful and sensitive call – and we are deeply dismayed that the Anti-Defamation League has gone so far as to pull out of a scheduled Jewish-Christian dialogue in protest.  We believe that actions such as these run directly counter to the spirit and mission of interfaith dialogue. True dialogue occurs not simply on the areas where both parties find agreement, but in precisely those places where there is disagreement and divergence of opinion. We call on all of our Jewish colleagues to remain at the table and engage our Christian colleagues on this painful issue that is of such deep concern to both our communities.

We express our full support for the spirit and content of this statement and likewise call upon US citizens to urge their representatives to end unconditional military aid to Israel.