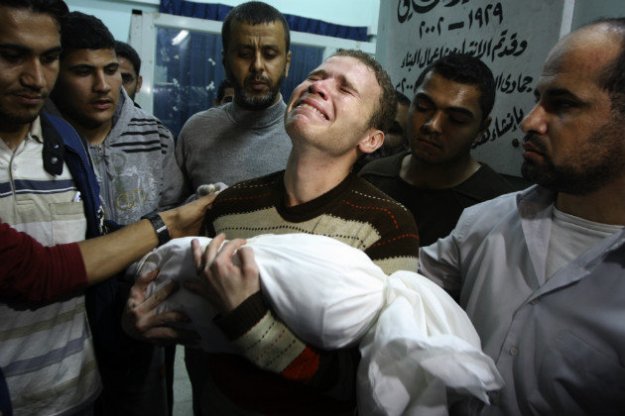 Israel’s military assault on Gaza in 2008-09 represented an important turning point in my own relationship with Israel. I recall experiencing a new and previously unfamiliar feeling of anguish as Israel bombarded the people living in that tiny, besieged strip of land over and over, day after day after day. While I certainly felt a sense of tribal loyalty to the Israelis who withstood Qassam rocket fire from Gaza, I felt a newfound sense of concern and solidarity with Gazans who I believed were experiencing nothing short of oppression during this massive military onslaught.

And now it’s happening again. Only this time I don’t think the term “anguish” quite fits my mindset. Now it’s something much closer to rage.

It’s happening again. Once again 1.7 million people, mostly refugees, who have been living in what amounts to the world’s largest open air prison, are being subjected to a massive military assault at the hands of the world’s most militarized nation, using mostly US-made weapons. And our President is not only looking on – he is defending Israel’s onslaught by saying it has a right to “self-defense in light of the barrage of rocket attacks being launched from Gaza against Israeli civilians.”

No, this is just the latest chapter of a much longer saga that began in 1947-48, when scores of Palestinians were ethnically cleansed from their cities and villages in the coastal plain and lower Galilee and warehoused in a tiny strip of land on the edge of the Mediterranean. By all accounts, most were simply too overwhelmed to realize what was happening. The ones who tried to return to their homes were termed “infiltrators” and were killed on sight. Others resisted by staging raids in the newly declared state of Israel. Sometimes they succeeded, more often they did not. Either way, Israel decided early on that it would respond to each of these reprisals with a overwhelming military show of force.  And those reprisals and that show of force have essentially been ongoing until this very day.

I realize, of course, there is plenty of political subtext to this latest go-around.  I’ve read the timelines and have formed my own opinions on the latest “who started it?” debate. I’ve also read plenty of analyses by Israeli observers who believe that this was not a response to Qassam fire at all but was very much a “war of choice” waged by an Israeli administration looking to shore up political support in an election season.

I’ve also read a widely circulated article from Ha’aretz about Israel’s recent execution of Ahmed Jabari (the head of Hamas’ military wing). I learned that up until now, Jabari was “Israel’s subcontractor” for security in the Gaza Strip, that Israel has been literally funding Hamas through intermediaries in exchange for peace and quiet on their southern border, and that when Jabari failed to deliver of late, the decision came down to take him out. Another article, written by the Israeli who negotiated with Jabari for the release of Gilad Shalit, revealed that negotiations were still ongoing with Jabari when the Israeli military assassinated him with a drone strike.

Yes, the wonky side of me has been avidly reading all these analyses. And while I do believe they provide an important counterbalance to the mythic statements by Israel’s Foreign Ministry and the US State Department, the more I read the cynical political subtext for this war, the sicker I get. No, this isn’t about Qassams, but don’t be fooled into thinking it’s about elections either. It’s really just the most recent chapter in a much longer litany of injustice – the latest attempt by Israel bring the Palestinians to their knees through the sheer force of their formidable military might.

Of all the analyses I’ve yet read, one of the very few that truly seemed to grasp this truth came from Yousef Munayyer, of The Jerusalem Fund/Palestine Center:

The problem Gaza presents for Israel is that it won’t go away—though Israel would love it if it would. It is a constant reminder of the depopulation of Palestine in 1948, the folly of the 1967 occupation, and the many massacres which have happened since them. It also places the Israelis in an uncomfortable position because it presents a problem (in the form of projectiles) which cannot be solved by force…

Why, then, would Israel choose to revert to a failed strategy that will undoubtedly only escalate the situation? Because it is far easier for politicians to lie to voters, vilify their adversaries, and tell them ‘we will hit them hard’ than to come clean and say instead, ‘we’ve failed and there is no military solution to this problem.’

Like last time, I know many in the Jewish community will say it is unseemly of me to criticize Israel this way while Israelis live in fear of Qassam fire out of Gaza. I know there are those who believe that by writing these words, I’m turning my back on my own people in their time of need. But I know in my heart that my outrage at Israel’s actions goes hand in hand with compassion for Israelis – particularly those who know that their leaders’ devotion to the sword is leading them into the abyss.

Additionally, as I wrote under tragically similar circumstances in 2009:

I believe Israel’s response to Hamas’ missile attacks have been disproportionate and outrageous. I believe their actions only further endanger the security of  Israelis while inflicting collective punishment and a severe humanitarian crisis upon Gazans. Indeed, just as I cannot understand what it must be like to be a citizen of Sderot, I cannot even begin to imagine what it must be like to be a Gazan citizen at the moment, living under constant air attack, with no running water or electricity and dwindling food, as hospitals fill up with wounded and corpses lie rotting in the streets because relief workers are unable to reach them.

When will we be ready to accept that this is not a “balanced” conflict or even a “war” by any reasonable definition – and that it never was?  When will we face the painful truth that this is not a story about one side versus the other but about one side oppressing the other?  Frankly, all the well-meaning liberal comments about “praying for peace on both sides” and leave me cold. Worse, I find them insidious because they simply serve to support the myth that this is a conflict between two equal parties. It is not. And peace will not come until we admit this – until we admit that there is an essential injustice at the heart of this tragedy and that try as it might, Israel will never be able to make it go away through the sheer force of its increasingly massive military might.

Beyond the rage, I’m heartened that this time around there is a growing community of conscience that is speaking out publicly and in no uncertain terms to protest Israel’s latest outrage in Gaza. I am so deeply grateful for my friends and colleagues at Jewish Voice for Peace, who is alone in the Jewish world in condemning this latest assault.  I urge you to read JVP’s courageous statement, which I know gives voice to increasing numbers of Jews and non-Jews, young and old, religious and secular, who are coming together through the courage of their conscience.

At this point in my posts I would typically write “click here” to lend your voice to some kind of collective statement.  I’m going resist that temptation and urge you instead to take to the streets.

I’ll see you there.

83 thoughts on “Outrage in Gaza Redux”