Helena Cobban (left), Sarah Grey and me at the FCNL office

Had a wonderful whirlwind visit in Baltimore/DC, highlights included book readings in Baltimore, DC and Georgetown and a visit with the National Friends Legislative Committee to Senator Dick Durbin’s office to encourage him not to support a Senate defense authorization bill that sought to punish Palestinians for seeking non-member observer status at the United Nations. Thankfully, the amendment never came up for a vote.

While in DC, I also had the pleasure of being interviewed by blogger/journalist Mitchell Plitnick for Inter Press Service News Agency. (The full version appears on Mitchell’s blog.)

To create political power, leveraging people power is the best method, and historically, this has been shown to be the case. The fact that Israel is reacting so harshly against it shows its potential. When Hillary Clinton says 3000 new settlements are “not helpful,” that doesn’t get Israel’s attention. But when (Jewish Voice for Peace), (Students for Justice in Palestine) and church groups move to get corporations and holding companies to divest from Israel, that’s front page news in Israel. That is a sign that this has a great impact, when used in a smart and concerted way.

One of the big pleasures of the trip was finally getting the chance to meet Just World Books publisher Helena Cobban and my editor, Sarah Grey, both of whom have thoroughly become my kindred spirits.

Some more pix from my trip: 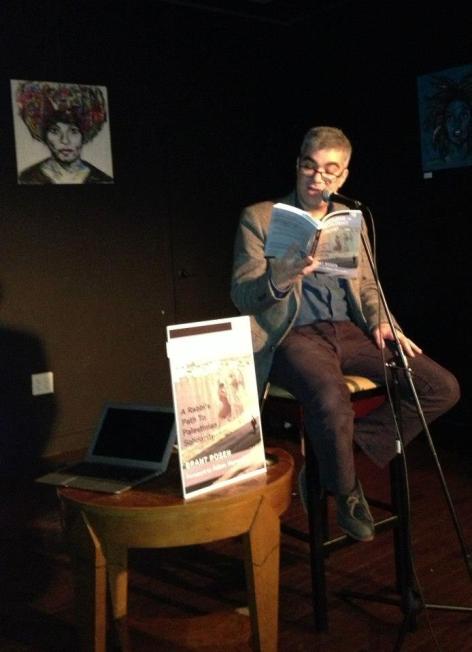 Book reading at Busboys and Poets, Washington DC (under the watchful gaze of Angela Davis)