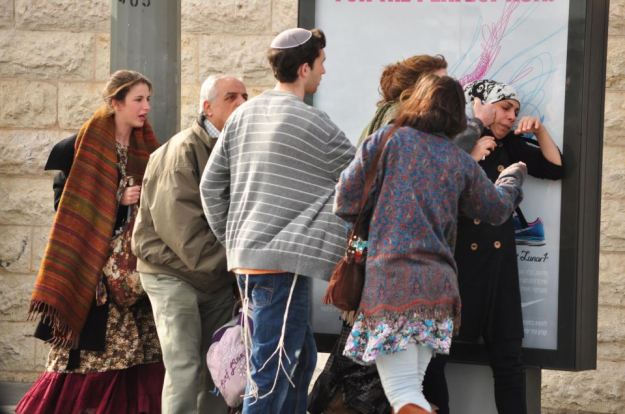 Purim 2013: A Palestinian woman is attacked by ultra-nationalist Jews in Jerusalem.

Like many Jews around the world, I dutifully celebrated Purim last week. In my case, it meant hearing the Book of Esther read aloud in my synagogue while drinking an occasional shot of scotch, enjoying our annual “Oy Vey Cafe,” (a beloved congregational tradition that mixes member-written and performed show tune and classic rock parodies) and attending our synagogue Religious School’s costume parade and Purim carnival.

Last week on the day after Purim, it was reported that a Palestinian woman was attacked by ultra-orthodox women at a light rail station in Kiryat Moshe, Jerusalem.  According to the Israeli newspaper Ma’ariv, an ultra-Orthodox Jewish woman walked by the Palestinian woman and began punching her (see pic above).  Others soon joined in the attack and eventually tore off her hijab. According to the report, the light rail security guard, as well as some 100 religious Israeli men, stood by and did nothing. Eyewitness Dorit Yarden Dotan, who was horrified by the violence and took photos of the beating with her telephone, reported that the security guard even “watched and smiled”. “It was simply terrible,” she added. 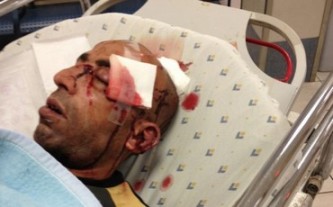 By the way, this was not the only act of Purim violence this year. On the same day as the Jerusalem attack, a Palestinian citizen of Israel, Hassan Usruf (right), was attacked by drunken Jewish youths whom police suspect had been participating in Purim celebrations during the evening. Usruf was punched, hit in the head with a bottle and kicked after he fell to the ground. He sustained injuries to his head, eye socket and jaw. The police have yet to arrest any suspects.

Those who follow the news must surely know that this kind of Jewish violence against Palestinians have become an annual inevitability in Israel. The most infamous Purim moment, of course, occurred in 1994, when Baruch Goldstein walked into the Cave of Machpelah in Hevron wearing an Israeli army uniform and opened fire on Palestinian worshipers, killing 29 and wounding more than 125.  By committing this act of mass murder, Goldstein believed he was fulfilling the the Book of Esther, which describes the slaughter of seventy five thousand Persians at the hands of the Jews. Since that time, Goldstein has become venerated by ultra-orthodox, ultra-nationalist Jews and for rest of us, Purim has never been quite the same. 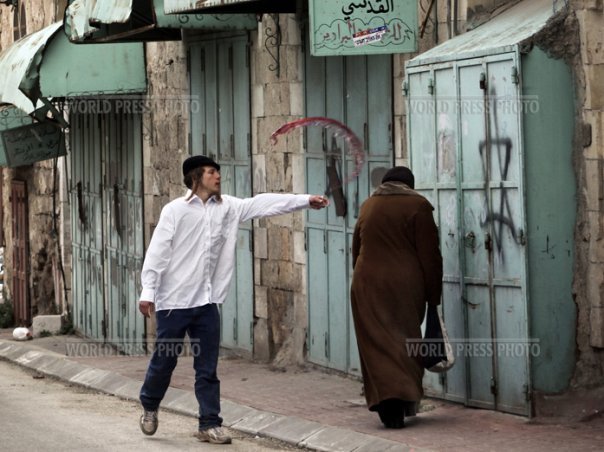 I’ve recently finished Elliot Horowitz’s 2006 book “Reckless Rites: Purim and the Legacy of Jewish Violence” – a deeply troubling (but to my mind, profoundly essential) book that traces the history of Jewish violence on Purim over the centuries. Among the many disturbing revelations of Purim history in Horowitz’s book, I was surprised to learn that bad Jewish behavior on Purim has a long and not so venerable history – one that most Jewish histories either gloss over or simply choose to ignore.

Horowitz also parses the history of Purim violence in contemporary Israel, going back to Purim 1981, when Jewish settlers brought down the roof of a Palestinian upholsters’ home, expelled its owner and took over the house. (The house had once been a Jewish infirmary and synagogue, “Beit Hadassah.”) Since then, the settlers’ Purim parade in Hevron has become an annual tradition of Jewish pogroms against Palestinians. As last week’s events have demonstrated, however, this brutality is now ominously expanding into Israel proper.

Yes, the Book of Esther does come off as a kind of Jewish communal revenge fantasy, one that portrays the Jews’ massacre of the ancient Persians with sick kind of relish. As for me, I’ve always read the book according to the satirical spirit of the day: an expression of the “Jewish Id” that gives us the chance to indulge our darker fantasies in this one cathartic moment, perhaps so that they might have less of a hold over us during the rest of the year.  But of course, there are – and apparently have always been – religious literalists who are all too prepared to treat what is essentially a secular tale of palace intrigue as a sacred imperative to engage in xenophobic violence against others.

In his book, Horowitz quotes the venerable Jewish scholar Samuel Hugo Bergman (1883-1975), a former rector and professor at Hebrew University, who expressed dismay at boorish and violent behavior of Jews on Purim. Bergman – a religiously observant Jew – commented that its continued observance as a religious holiday was a sign of “the deep decay of our people.”  (p. 277)

18 thoughts on “Jewish Violence on Purim: Time for a Religious Reckoning?”