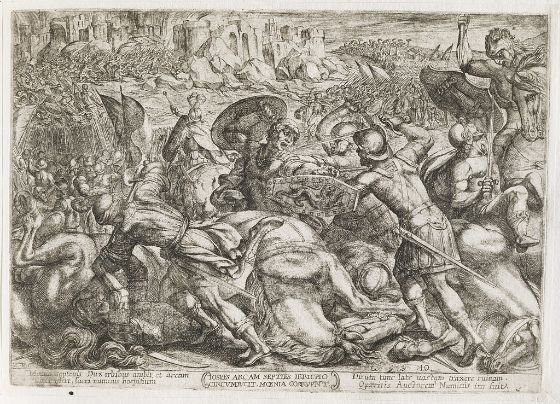 “The Fall of Jericho” (Antonio Tempesta)

In honor of Passover, I’d like to share an excerpt from article I’ve recently finished that attempts to articulate a Jewish Theology of Liberation. The longer piece will hopefully be published soon – in the meantime, I offer this snippet to you as “food for thought” for your seder table. All the best for a liberating Pesach!

The Exodus is, of course, the sacred liberation story par excellence, in which God hearkens to the cry of the persecuted, rebukes the oppressor Pharaoh and frees the enslaved. While this narrative is clearly presented within a particularist context (God hearkens to the cry of God’s oppressed people), it has historically resonated with universal power. As the social and political scientist Michael Walzer has observed, a myriad of liberation movements have been indelibly marked with Exodus consciousness throughout the course of Western civilization.[1]

On the most basic level, then, a Jewish theology of liberation must necessarily view the Exodus as both a particular narrative of a certain people as well as a universal narrative that encompasses all humanity.  The oppression of the Jewish people must be understood as inseparable from the oppression of all peoples – likewise the liberation of the Jewish people must be inextricably linked to the liberation of all peoples. While the historical events may differ in the details, they are all bound by a common sacred truth: the voice of the God of Liberation calls out in every language and in every generation to demand the liberation of the oppressed.

However, if we read the Exodus story honestly and unflinchingly, we must be ready to admit the presence of another, darker voice present in this narrative. The Exodus does not only describe the liberation of an oppressed people from bondage – it also contains the story of a journey toward and entrance into a “Promised Land” inhabited by other peoples – indigenous inhabitants whom the Israelites are commanded to dislodge and exterminate without pity.[2]

As difficult as it may be to read morally repugnant passages such as these in one’s “sacred” text, it is even more unsettling when we consider that these imperatives are deeply embedded within our cherished liberation narrative. In a sense, the “Exodus” is only the first half of a much longer story – a saga that begins with the Israelites exit from Egypt (Exodus) and ends with their entrance in Canaan (Eisodus). As the narrative would have it, we cannot have the Exodus without God’s promise of the land – and this promise cannot be fulfilled without the Israelites obedience to a commandment that demands nothing less than ethnic cleansing and even extermination.

The late Catholic scholar Dr. Michael Prior has left us with a profoundly important and often devastating critique of the Biblical Eisodus tradition. In a 2000 essay entitled, “Confronting the Bible’s Ethnic Cleansing in Palestine,”[3] Prior described his “growing unease about the link between biblical spirituality and oppression” during his studies as a visiting university student in the West Bank in the 1980s. As a result of his witness, he felt compelled to examine the land traditions of the Bible more deeply – and confront the essential moral problems that lay at their core:

By modern standards of international law and human rights, what these biblical narratives mandate are “war crimes” and “crimes against humanity.” While readers might seek refuge in the claim that the problem lies with the predispositions of the modern reader, rather than with the text itself, one could not escape so easily. One must acknowledge that much of the Torah, and the Book of Deuteronomy in particular, contains menacing ideologies and racist, xenophobic and militaristic tendencies. The implications of the existence of dubious moral dispositions, presented as mandated by the divinity, within a book which is canonized as Sacred Scripture, invites the most serious investigation. (Is) there a way of reading the traditions which could rescue the Bible from being a blunt instrument of oppression, and acquit God of the charge of being the Great Ethnic-Cleanser?[4]

Prior became committed to evaluating the land traditions of the Bible against “general ethical principles and criteria of human decency, such as are enshrined in conventions of human rights and international law,” believing resolutely that “any association of God with the destruction of people must be subjected to an ethical analysis,” and demanding that we ask ourselves whether we really seek to apologize for Biblical texts that portray God as  “a chauvinistic, nationalistic and militaristic xenophobe.”[5]

Prior’s scholarship was guided by the conviction that “biblical studies and theology should deal with the real conditions of people’s lives, and not satisfy themselves with comfortable survival in an academic or ecclesial ghetto.” In particular, he was concerned “about the use of the Bible as a legitimization for colonialism and its consequences.”[6] His subsequent scholarship thus examined the way the Biblical land tradition inspired “the colonization by Europeans of Latin America, South Africa and the Middle East” as well as “the history and development of Zionism.”[7]

Biblical scholars have the most serious obligation to prevent outrages being perpetrated in the name of fidelity to the biblical covenant. The application of the Bible in defense of the Crusades, Spanish and Portuguese colonialism, South African apartheid and political Zionism has been a calamity, leading to the suffering and humiliation of millions of people, and to the loss of respect for the Bible as having something significant to contribute to humanity.[8]

As Prior’s challenge makes all too clear, the moral problems of the Biblical land tradition are not simply academic – they have had, and continue to have, real life consequences for real people. Thus, those who cherish Biblical tradition cannot equivocate on this point: we simply cannot lift up the Exodus tradition without also simultaneously calling out the Eisodus tradition.  As Prior rightly pointed out, even liberation theologians themselves cannot be exempted from this challenge.[9]

Using a contemporary hermeneutic, we must discover a theology of Jewish liberation that celebrates the voice of God that demands freedom in the Exodus story and be prepared to reject the voice of human cruelty and oppression that calls for holy war against Canaan’s indigenous peoples.  This is indeed a religious and moral duty for all liberation theologies, but for obvious reasons it is particularly critical for the Jewish people living in the age of Zionism. We cannot be unmindful that the land traditions of the Bible that were central to the formation of Jewish political nationalism and have been used in various ways by early Zionist ideologues, the political founders of the state and by the present day religious settler movement.[10]

The insidious comparison of Palestinians to the nations of Canaan has become particularly ubiquitous in the words of Israeli politicians, settler leaders and ultra-religious rabbis alike. Statements such as these must not be dismissed as mere religious rhetoric. These theological linkages have enormous power, particularly when we consider the historical reality of the Zionist enterprise that includes the expulsion of Palestinians from their homes in 1947-48 and policies of displacement and transfer that continue to this very day.

This is not to say that an honest reckoning with the Biblical land tradition means simply ignoring or somehow “surgically excising” the passages that describe the Israelite Eisodus.  It does mean, however, that as suggested above, we recognize the voice that commands the genocide of others for what it is and what it is not.  And through this recognition, these otherwise odious passages may yet become spiritually instructive to us, albeit in a decidedly different way.

As Prior has observed, “it is high time that biblical scholars, Church leaders and Western intellectuals read the biblical narratives of the promise of the land “with the eyes of the Canaanites.”[11]  Prior admits that his consciousness on this point was raised after reading the comments of one Native American activist: “The obvious characters for Native Americans to identify with are the Canaanites, the people who already lived in the promised land… I read the Exodus story with Canaanite eyes.”[12]

Testimonies such as these call to us to encounter these texts in a new way – not through apology or disregard, but with sacred empathy.  If we are to truly hear the God of liberation speaking to us through Biblical tradition, we must be prepared, quite simply, to read the story of the Exodus through the eyes of the Israelites and the story of the Eisodus through the eyes of the Canaanites.

3 thoughts on “For Passover: Exodus Without Eisodus”