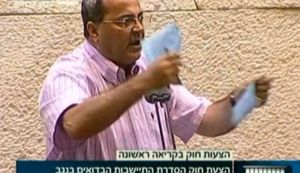 Ha’aretz has just reported that the Israeli government’s Prawer-Begin plan, which would evict up to 40,000 Bedouin citizens of Israel from their homes in the Negev, has passed its first Knesset reading by a majority of 43 to 40:

The vote on the Begin-Prawer plan was held following a tense Knesset session, in which the Arab MKs rose one by one and tore up the draft in a declaration of their their opposition to it…

The Ministerial Committee on Legislation last month approved the law to resolve land-use issues related to the population, after Housing and Construction Minister Uri Ariel managed to reach a series of compromises with Prime Minister Benjamin Netanyahu and former minister Benny Begin on that matter to win the support of the Habayit Hayehudi party…

The plan has sparked fury in the Bedouin community, who call it immoral and impractical.

If you haven’t yet, please, please sign and send this Avaaz.org petition that calls upon Knesset members to vote against the Prawer plan.

UPDATE: Jewish Voice for Peace has just sent out an email blast which includes a link to send an email to Israeli Ambassador Michael Oren urging him to use his “influence to warn Knesset members from taking further steps forward, while there is still time to avoid this human rights catastrophe.”