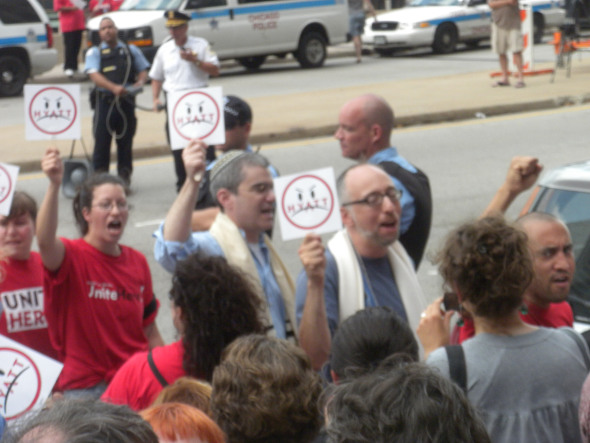 Readers of this blog know I’ve long stood in solidarity with Hyatt hotel workers during their four year struggle for justice. (If you’d like a little history, you can read about it here, here, here and here, for instance.)

I’m thrilled to now learn that the Hyatt workers’ union, UNITE HERE has reached a national agreement with Hyatt. According to a union press release which came out yesterday, both UNITE HERE and Hyatt have hailed the agreement as “a positive step:”

The agreement will go into effect upon the settlement and ratification of union contracts by Hyatt associates in San Francisco, Honolulu, Los Angeles, and Chicago.  Pending associate approval, the contracts will provide retroactive wage increases and maintain quality health care and pension benefits.  The proposed new contracts would cover associates into 2018.A key provision of the agreement establishes a fair process, which includes a mechanism for employees at a number of Hyatt hotels to vote on whether they wish to be represented by UNITE HERE.  As part of the accord, upon ratification of the union contracts, UNITE HERE will end its global boycott of Hyatt.

D. Taylor, the president of UNITE HERE, said, “We look forward to a new collaborative relationship with Hyatt.  This agreement shows that when workers across the hotel industry stand together, they can move forward, even in a tough economy.  Both organizations deserve credit for working out this constructive step forward.”

“We are delighted that our associates in Chicago, Los Angeles, San Francisco, and Waikiki will have contracts and the pay raises that go with them,” said Doug Patrick, Senior Vice President, Human Resources for Hyatt.

The Chicago Tribune has reported that according to the agreement, about 5,000 workers would see pay and benefits packages rise an average of 4 percent a year. Regarding the issues of job safety and outsourcing (two key issues for the union), Chicago Public Radio reports “the new contracts will include no new safety language but will bring some outsourced work back to Hyatt.”

I’m delighted for the workers of Hyatt and it has been my honor to stand with them during the course of this long and difficult struggle. One important takeaway for me is the importance and effectiveness of boycotts as an essential tool of the labor movement. In particular, I hope organizations will increasingly insist upon protective language in their hotel contracts so that they can honor boycotts without penalty.

This campaign has also opened my eyes to the hard truth that labor justice is nowhere near the priority in the Jewish community that it once was. Indeed, the Hyatt boycott represented an important test to my community – and it is clear to me that there is much work left to be done. I wrote as much in the Jewish Forward last year when it was revealed that the Religious Action Center of Reform Judaism had signed contracts with boycotted Hyatt Hotels for their conventions:

It is simply not enough to invoke the International Ladies Garment Workers Union and offer bland statements about the historic role Jews played in building the American labor movement. True solidarity means understanding that the struggle ever continues. And that there are flesh and blood “stakeholders” in our own day who call on us to support the sacred cause of worker justice.

Congratulations to UNITE HERE and to all those who stood in solidarity with the workers of Hyatt. And now the struggle continues…

3 thoughts on “UNITE HERE and Hyatt Reach an Agreement!”