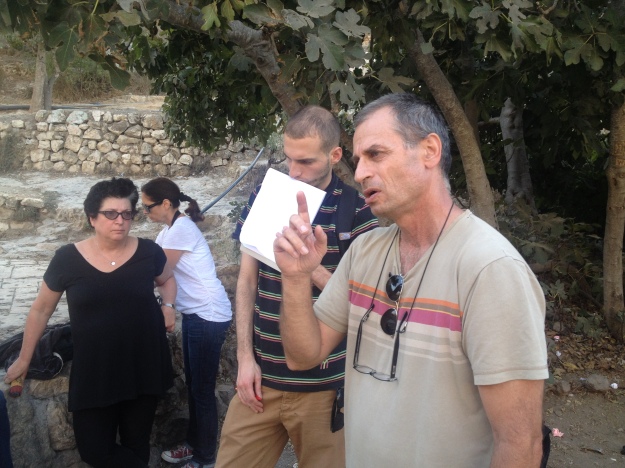 There are many forms of resistance to oppression. One is memory itself.

On Tuesday our delegation visited the village of Lifta, a Palestinian village on the outskirts of Jerusalem that was depopulated of its residents by Jewish militias early in 1948. Our tour was led by Eitan Bronstein, director of Zochrot, an Israeli organization that educates Israelis about the Nakba, actively advocating for the Palestinian Right of Return. It’s truly one of the bravest, most important Israeli organizations I know.

Zochrot’s tours of destroyed Palestinian villages are an critical aspect of their educational work. They are, of course, not your typical tours – in most cases they do not show you what is, but rather what is no more. Most Palestinian villages destroyed during the Nakba were razed to the ground, leaving little behind but the shell of a building or the occasional foundations of homes.  Zochrot keeps the culture life of these communities alive through their tours, underscoring the profound enormity – and collective tragedy – of what was lost. 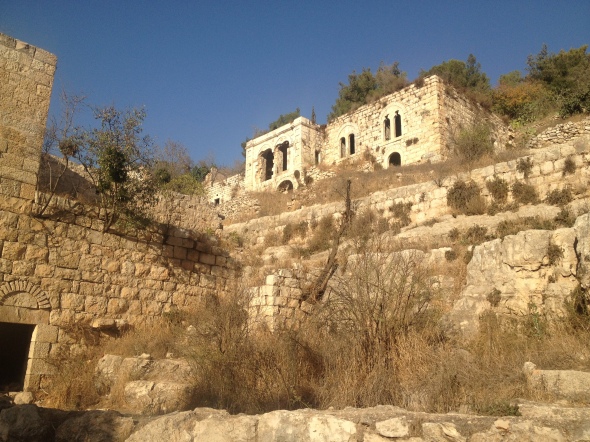 Lifta is somewhat unique among these villages in that it is the only Nakba-era village that still remains largely intact. In its day it was a fairly well-to-do community, with a population of 2,550.

In the years leading up to the 1948, the village fell under attack by Jewish militias in the area. On the December 28, 1947 six people were gunned down in the village coffeehouse, by members of two Jewish militias, the Stern Gang and the Irgun. In late January or early February, the militias attacked and seized the neighboring village of Qaluba and then invaded Lifta from the West. They occupied Lifta’s new town and the remaining residents took refuge in the old town in the valley. The village was cut-off from the west and anyone trying to leave was killed. The villagers resisted but were defeated after several hours of fighting.

By the time the entire village was occupied, most of the people had already left Lifta and fled into the West Bank, the rest were taken by truck and dumped in East Jerusalem. By February 1948, Lifta had been completely depopulated.  It’s not completely clear why the Jewish forces did not raze Lifta to the ground as it had so many other villages. For a time it allowed newly-immigrated Yemenite Jews to occupy the houses, but when the homes proved uninhabitable, they were eventually abandoned 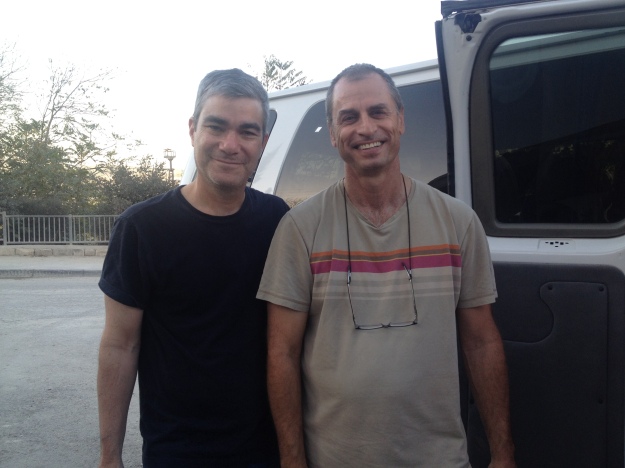 Lifta was the object of some controversy when the Jerusalem municipality announced plans to redevelop the area as a luxury area for Israelis. The plans were dropped after an outcry from former residents and progressive Israeli activists. In the meantime, the remnants of this remains, a testament to the legacy of a rich communal life that was lost during the Nakba.

I can see why Lifta is such a popular spot for Israeli tourists – the town ls nestled in a long valley, with homes and buildings built into either side. The mosque and the Muktar’s house are still in decent condition, testifying to what clearly once was a beautiful, desirable town. At the bottom of the valley is a natural spring that still attracts swimmers, particularly ultra-orthodox who attribute spiritual significance to it. As Eitan showed us the area, the swimmers glared at us as if we were interloping in their own “sacred territory.”  They clearly had no comprehension of the actual profanity that had occurred here in 1948.

On Wednesday evening, we visited another Nakba site: El Ghabsiya, located in the upper Galilee (where were visiting members of delegation members Shafic and and Dima Budron’s family – more on this later). Our tour of El Ghabsiya was led by Muhammad Kaial of the Association for the Defense of the Rights of the Internally Displaced Persons in Israel, and Daoud Bader, an original survivor of the original village.

The story of El Ghabsiya, like Lifta, is an example of how the Nakba is not only a historical event of the past, but an injustice and a struggle that occurs even in our very day. In March 1948, fearful that uncertainty in Palestine’s future could endanger the people of the village, prominent members of El Ghabsiya made an agreement with Jewish militia leaders. In exchange for his cooperation, the militia promised not to invade the village. (At that time, the population of the village numbered about 700 people.) 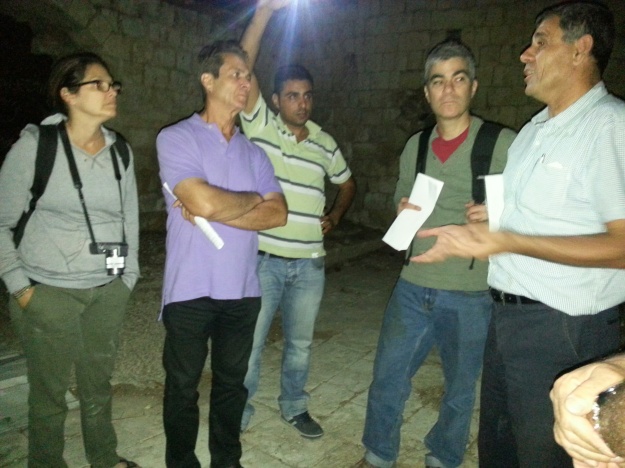 The agreement was not to be honored. In May 1948, Jewish militias surrounded and entered the village. Families living near entrance to the village greeted the soldiers with coffee; in return father and his son were taken out into the nearby woods – Daoud told us that they have never been heard from to this day. When the soldiers entered El Ghabsiya, a community leader named Daoud Zainl climbed to the roof of the mosque and raised a white flag. The militia ignored his act of surrender, opened fire, and killed him on the spot. In  all, eleven Palestinians were killed during the attack on El Ghabsiya and the subsequent expulsion of its residents, despite the fact that there was no local resistance.

The inhabitants of the village escaped to surrounding villages, becoming “internally displaced refugees.” Unlike other internally displaced Palestinians, the people of El Ghabsiya were allowed to return to their homes less than twelves months later – but two years later, on August 2, 1951, then Prime Minister David Ben-Gurion declared the village a “closed military zone” and the villagers were again forced to leave their homes.

The people of El Ghabsiya fought for their right of return all the way to the Israeli Supreme Court and on November 1951, the court ruled that they did indeed have the legal right of return to their village. Armed with this ruling, the villages gathered and headed back to their homes – and were met by Israel military forces the blocked their way and refused to recognize the decision of the court.  In succeeding years, government bulldozers destroyed all of the houses in the village – the only building left standing was the village mosque.

For the next forty five years, the Israeli Land Authority allowed the mosque to sit in disrepair and desecration, used as a stable for horses and other animals. Finally, in 1995 residents and descendents of residents of El Ghabsiya initiated a clean-up project and began weekly attempts to pray at their mosque. In response, the Israeli Land Authority sealed the windows and doors and ringed the mosque with barbed wire. 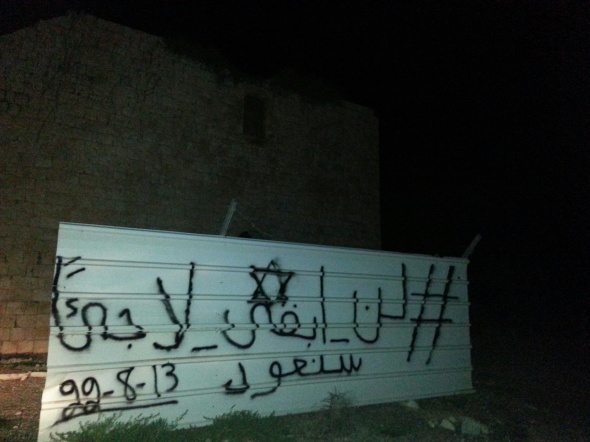 Outside El Ghabsiya mosque: “I will not remain a refugee – we will return.”

Still, the people of El Ghabsiya have not given up. Most live in villages near their ancestral village and they still make regular attempts to gather to pray at their mosque. Above you can see the sign villagers have placed in front of the mosque: “I will not remain a refugee – we will return.” (You can also see that the sign has been vandalized, sadly enough, with a Jewish star.)

After hearing this story, our group toured the mosque and gathered in the courtyard. On of our members Kalman Resnick said that as a member of the Jewish community and a man whose own family fled persecution, he felt shame at hearing this story of dispossession, that continues to this day. I then led the Jewish members of our delegation in the recitation of Kaddish for those who were killed on this site in 1948.  In return, Daoud, the original resident of the village, emotionally expressed his appreciation for our presence and our solidarity – a profoundly moving moment for us all.

After our visit, our group discussed ways we might help support the people of El Ghabsiya in their quest for justice – and their simple desire to pray in their ancestral mosque. More info on this effort will be forthcoming.

We’ve just returned from our Friday demonstration. It was, quite simply, an indescribable experience –  I’ll do my best to describe it in my next post…

5 thoughts on “Remembrance as Palestinian Resistance”