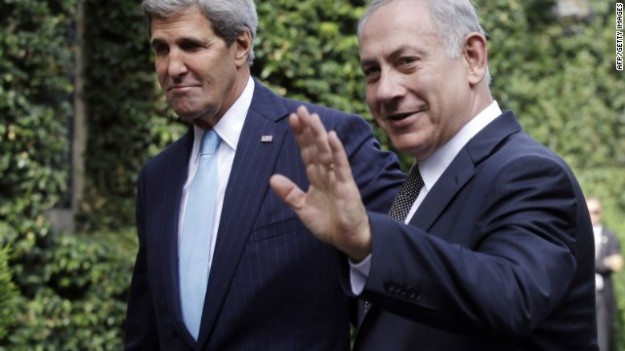 We learned yesterday that Netanyahu and his senior ministers are all astir by remarks made by John Kerry at a recent security conference in Germany. Echoing similar warnings he’s made in the past, Kerry noted that the failure of talks would only increase Israel’s isolation in the international community:

Today’s status quo absolutely, to a certainty, I promise you 100 percent, cannot be maintained. It’s not sustainable. It’s illusionary … You see for Israel, there’s an increasing delegitimization campaign that has been building up. People are very sensitive to it. There are talks of boycotts and other kinds of things.

Responding quickly, Netanyahu criticized the remarks during a subsequent cabinet meeting. Yuval Steinitz, Israel’s minister of strategic affairs, told Israel Radio on Sunday that Mr. Kerry’s comments were “hurtful,” “unfair” and “intolerable” and added, “Israel cannot be expected to negotiate with a gun to its head.” Not to be outdone, Knesset member Motti Yogev, of the Bayit Hayehudi party said Kerry’s “obsessive pressure” had “anti-Semitic overtones.”

There’s much to be said about the escalation of a war of words between Israeli politicians and the US Secretary of State. For my part, however, I’m less interested in a diplomatic pissing match over a moribund peace process than the way the issue of boycott has now firmly become entrenched in official discourse. Can their be any surer sign that the Boycott, Divestment and Sanctions movement has become a force to be reckoned with?

In this regard, I couldn’t help but be struck by Netanyahu’s comments in response:

Attempts to impose a boycott on the state of Israel are immoral and unjust. Moreover, they will not achieve their goal.

Of course, Kerry made no such claim that boycotts were “moral” or “just” (as a defensive State Department spokesperson hastened to point out). He was simply noting their very existence. And Netanyahu’s apoplectic reaction over this harmless comment makes it clear that he takes their existence very, very seriously indeed.

As well he should. With the recent American Studies Association announcement that it is honoring the academic boycott of Israeli universities – and the even more recent attention over Scarlett Johansson’s ill-fated agreement to shill for SodaStream – BDS is increasingly moving into the mainstream media spotlight. And more importantly, it is increasingly gaining adherents.

Anecdotally speaking I can attest to the growth of this movement by the growing number of conversations/debates I’ve been having on the issue of BDS. Generally they retread over the same territory: “Is BDS anti-semitic?” “Is BDS a double-standard?” “Is BDS effective?” “Will BDS lead to the destruction of Israel?”

I’m not interested in addressing these questions here – I’ve explored them at length in numerous blog posts dating back to 2009. Besides, it seems to me that right now the most important thing we can say about the BDS movement is that it is here to stay  – and as long as Israel’s intolerable treatment of Palestinians continues, it promises to be chalking up even greater successes in the near future.

That’s why Kerry’s comments – candid though they were – smacked to me of a very real disingenuousness.   After all, what is the real “delegimization campaign” here: the BDS movement or Israel’s oppressive policies toward Palestinians?  If our government is unable or unwilling to hold Israel to account, we should not be surprised by the growth of a popular movement that does.