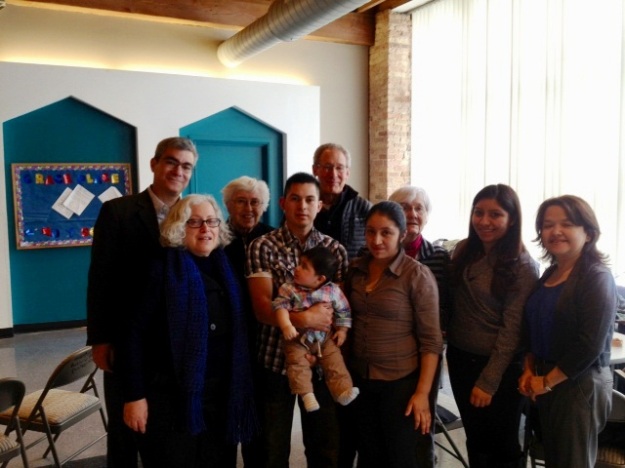 Anibal Fuentes (fourth from left) with his wife and son.

One individual story to drive home the tragically high cost of our nation’s broken immigration system:

On Friday, December 6, US Immigration and Customs Enforcement (ICE) agents raided an apartment building in the Albany Park neighborhood on the north side of Chicago. They knocked at all of the apartments in the building holding a picture of somebody they claimed to be looking for and interrogating anyone who answered the door. When Anibal Eligio Fuentes Aguilar tried to help answer their questions they took him away from his wife and infant son, placed him in a detention center and told him he was going to be deported.

The apartment building where Anibal and his family live has been raided by ICE at least four times in the past year and there have been immigration raids in other parts of the neighborhood as well. ICE agents arrive wearing police vests, question anybody they come across and take undocumented immigrants into custody.

Anibal first came to the US to when he was 16. When his mother passed away he visited Guatemala to attend her funeral but was stopped once by border patrol on his way back to Chicago in 2009. He has always been very active in his community and is a member of his local soccer league. He has a 6-month old baby, Franky, who is a US citizen. Anibal has no criminal record, and was only placed into immigration custody due to his encounter with border patrol five years ago. In addition, Anibal fears returning to Guatemala, a country where before his father passed away, he had been kidnapped three times. 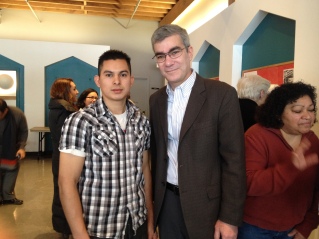 After Anibal was detained in December his family and community began to mobilize. He was released from detention, given an ankle bracelet and placed under continuous monitoring. ICE agents told him to have a ticket back to Guatemala by January 30th. His subsequent request for  prosecutorial discretion was denied, and he was given two months to leave the country. Last week he submitted a deferred action application to qualify under a relief program for undocumented youth established last year.

Yesterday, Anibal and his supporters held a press conference (pictures above and to the right) where we reaffirmed our  solidarity with him and his family before he resubmitted his application at Chicago ICE headquarters. By the end of the day, we learned he was granted a 6-month stay of removal.  While we are all obviously relieved by this latest outcome, ICE still has not closed his case. Unless something changes before September, we will continue our campaign to stop Anibal’s deportation.

Anibal’s case is but one of millions of stories of injustice across our nation, in which undocumented immigrants are victimized by a horribly broken system that is quite literally tearing families apart. While politicians dither in Washington over comprehensive, compassionate immigration reform, it makes sense at the very least to provide relief from deportations for those such as Anibal, who would be included in the bill.

Please click here to sign a petition urging President Obama to suspend deportations until Congress passes immigration reform – and to make sure those seeking a path to citizenship aren’t deported before it even opens.

In the meantime, I will continue to report on Anibal’s case. Stay tuned.