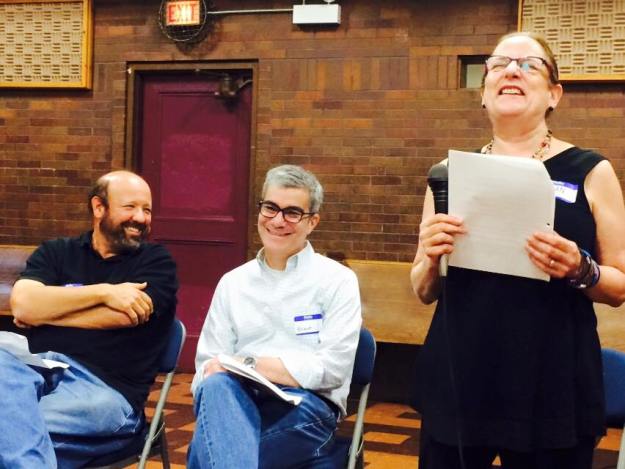 I’m honored and very, very excited to announce the creation of a new Jewish congregation: Tzedek Chicago. We recently held our launch program in our new home at Luther Memorial Church in the Lincoln Square neighborhood of Chicago – and I’m sure all who were present would agree there was a joyous excitement in the room as we shared our vision for our new congregation.

We’ll continue to reach out to potential members during the course of the summer and will officially kick off our religious programmatic calendar with High Holiday services this fall. I will be serving as the spiritual leader of Tzedek Chicago on a part time basis while continuing in my full time position as the Midwest Regional Director for the American Friends Service Committee. I feel blessed indeed to be returning to congregational life in addition to my important work at AFSC, which has itself become a meaningful professional, spiritual and political home for me in so many ways.

How to describe our new congregation? Let me begin by sharing our core values with you:

…a Judaism beyond borders:

We celebrate with a Judaism that builds more bridges, not higher walls. Our community promotes a universalist Jewish identity – one that seeks a greater engagement in the world around us. Within our congregation, we view our diversity as our strength. Membership is not restricted to Jews or those who are partnered with Jews; our community welcomes all who share our values.

We advocate for a world beyond borders and reject the view that any one people, ethnic group or nation is entitled to any part of our world more than any other. Guided by the values in Jewish tradition that bids us to care for the earth that we share with all peoples and all life, we promote personal behaviors and public policies that will ensure preservation of our planet’s natural resources and its survival for future generations.

…a Judaism of solidarity:

We are inspired by prophetic Judaism: our tradition’s sacred imperative to take a stand against the corrupt use of power. We also understand that the Jewish historical legacy as a persecuted people bequeaths to us a responsibility to reject the ways of oppression and stand with the most vulnerable members of our society. We emphasize the Torah’s repeated teachings to stand with the oppressed and to call out the oppressor.

We actively pursue partnerships with local and national organizations and coalitions that combat institutional racism and pursue justice and equity for all. We promote a Judaism rooted in anti-racist values and understand that anti-Semitism is not separate from the systems that perpetuate prejudice and discrimination. As members of a Jewish community, we stand together with all peoples throughout the world who are targeted as “other.”

…a Judaism of nonviolence:

Our activism is based upon a vision of shared security for the world; we support the practices of nonviolence, civil resistance, diplomacy and human engagement. We take a stand against militarism and colonialism, particularly when it is waged in our name as Jews and Americans.

We oppose all forms of communal, family and interpersonal violence and support organizations working to strengthen community health, and peaceful, supportive coexistence. In all aspects of our communal life, we expect our members to treat each other with respect, engagement, and openness to the differences among us.

…a Judaism of spiritual freedom:

We promote spiritual exploration and encourage our members’ diverse beliefs. Some of our members adhere to more traditional views of the divine while others view God as a human expression of our highest, most transcendent aspirations. Others do not define themselves as religious, but identify with the humanist and cultural aspects of Jewish tradition.

We honor the inherent integrity of all faith traditions and reject all forms of religious exceptionalism. We actively partner with other faith communities in ways that celebrate our shared values and common humanity. In our activism, we actively work for religious freedom in our country and throughout the world.

…a Judaism of equity

In accordance with Torah’s imperative that there should be no needy among us, we work in solidarity with those who assert that poverty has no place in a civilized and moral society – and that all people have the right to safe food and water, safe living spaces, health care and education.

We are committed to transparent and egalitarian governance and decision-making in our congregational life. We value the contributions of all members equally, regardless of age, gender, sexual orientation, wealth or social standing.

…a Judaism beyond nationalism

While we appreciate the important role of the land of Israel in Jewish tradition, liturgy and identity, we do not celebrate the fusing of Judaism with political nationalism. We are non-Zionist, openly acknowledging that the creation of an ethnic Jewish nation state in historic Palestine resulted in an injustice against its indigenous people – an injustice that continues to this day.

We reject any ideology that insists upon exclusive Jewish entitlement to the land, recognizing that it has historically been considered sacred by many faiths and home to a variety of peoples, ethnicities and cultures. We oppose Israel’s ongoing oppression of the Palestinian people and seek a future that includes full civil and human rights for all who live in the land – Jews and non-Jews alike.

I’m leading with this list because Tzedek Chicago is first and foremost a values-based community. What we do will be deeply informed by the values that drive us. By establishing this new congregation, we are very consciously attempting to create a Jewish spiritual home for the growing numbers of American Jews who cherish these values and seek a spiritual community in which to express them.

I’ve served as a congregational rabbi in liberal Jewish congregations for most of my adult life. And while I have found this work to be professionally meaningful and spiritually nourishing in its own right, I am now eager to explore a fundamentally different approach to Jewish congregational life. In particular, I’m interested in building an intentional Jewish community that views the pursuit of social justice as its central driving force.

I realize of course, that by espousing values such as these, our new congregation crosses any number of the contemporary Jewish community’s red lines. I certainly have no illusions how a Jewish congregation describing itself as “non-Zionist” and openly protests “Israel’s ongoing oppression of the Palestinian people” will be received by the Jewish establishment. Given centrality of Zionism and Israel advocacy in Jewish communal life, it would be fair to say that Tzedek Chicago is very much a dissident congregation in the Jewish world.

I do believe, however, that we must make room in our community for Jews whose values dissent from what the communal establishment deems “mainstream.” It bears noting that dissent has historically occupied a venerable and even sacred place in Jewish life. Our congregation consciously and proudly seeks to lift up this dissident legacy – one which has long been indigenous to Jewish tradition itself in so many critical ways.

Indeed, the values I’ve listed above reflect a distinct liberatory narrative that runs through the heart of Judaism and Jewish history. It is a narrative rooted in the Exodus story that tells of a God who stands by the oppressed and demands that we do the same. It resonates through the words of Biblical prophets who spoke dangerous truths to power. It can be found in the courageous example of ancient rabbis who responded to the trauma of exile at the hands of the world’s mightiest empire by creating a religion with a universal message of healing and hope.

Among other things, the founding of Tzedek Chicago is an attempt to reclaim this Jewish narrative of liberation. As such, it reflects our desire to stand down a decidedly different Jewish narrative that has taken hold of the Jewish community since the end of the Holocaust and the establishment of the state of Israel – one that teaches that traumas of the past will inevitably become our future unless the Jewish people embraces the ways of empire, nationalism, physical might and militarism.

There is clearly much more to say about this phenomenon (and those who have followed this blog surely know that I’ve had a great deal to say about it over the years.) For now I’ll only add this: there are increasing numbers who believe this new Jewish narrative represents a betrayal of our most sacred legacy – and who seek to place solidarity, liberation and justice back on the Jewish agenda.

A few more specifics about our new congregation:

– In addition to major holidays, we will be holding two Shabbat programs per month – one on Friday evening and one on Saturday morning.

– We have intentionally kept our annual dues affordable – at $150.00 per member – so that the baseline expectation for full membership can be accessible to as many as possible.

– We will provide children’s programming during the course of the year. We will not be establishing a formal religious school at the outset because we believe it should emerge organically out of the community we create (and not vice versa).

– Rather than engage in social justice activism, our community will focus on organizing to help build movements for social change. To this end, we will participate actively  in the growing grassroots solidarity movement that is organizing for a just peace in Israel/Palestine. We will also participate in Chicago’s rich and venerable organizing tradition by partnering with local community groups working for justice.

Needless to say, I will be posting about the work of our new community over the coming months and years. If our values and vision resonate with you please join us. You can visit our website here and our Facebook page here. If you have questions, feel free to email us at tzedekchicago@gmail.com

Finally, as I am filled with awe and gratitude to have reached this moment, I can only conclude with:

Source of all that lives and all that is:

We are so very grateful that you have given us life, sustained us, and brought us to this very sacred new beginning.

31 thoughts on “Tzedek Chicago: A New Congregation Puts Justice on the Agenda!”