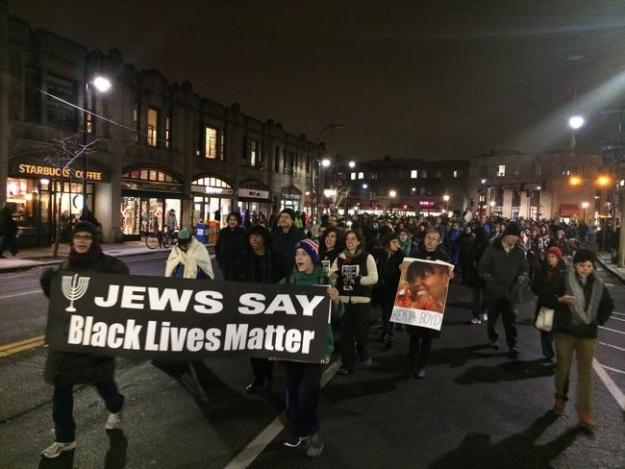 “Vision for Black Lives” is the product of a collaborative research and writing process that took more than a year by an eight person team – and is intensely relevant to the current political moment.  Team member Marbre Stahly-Butts summed up the purpose of the statement this way: “Democrats and Republicans are offering anemic solutions to the problems that our communities face… We are seeking transformation, not just tweaks.”

In contrast to the hollow posturing that counts for political discourse in the US, the M4BLM platform offers an important alternative vision: a deep analysis of how systems of oppression intersect and the devastating impact they have on people/communities of color. It’s particularly vital because it doesn’t come from a political party, think tank or special interest lobby, but rather directly from the grassroots communities most impacted by racism and oppression. In so doing, it represents a huge step toward the creation of a real movement for social and political change in our country.

This is a really, really big deal. By shedding its previous identity as a largely reactionary, structureless movement, Black Lives Matter seeks to definitively lead the national discussion on the safety, health, and freedom of black people. Painting the movement with a broad brush is a seismic shift. And it’s a shift that Occupy Wall Street never put in motion, a failure which many point to as the reason for the movement’s eventual dissolution. The list of demands set forth by M4BL explicitly unifies organizations across the United States—and though the goals are purposefully lofty, it’s a significant move towards harnessing the power of local groups into something bigger.

Vision for Black Lives has been welcomed enthusiastically by many allies in this growing movement (such as those fighting for immigrant justice for instance). And as for the Jewish communal establishment?  For its part, the Jewish Community Relations Council of Greater Boston angrily “disassociated” itself from the statement, calling it “false” and “malicious”. Why?  Because in the midst of this vast and extensive platform, the M4BLM statement referred to Israel’s “genocide” against the Palestinian people and expressed its support for the Boycott, Divestment and Sanctions movement.

Actually, I wouldn’t expect anything else from an organization such as the Boston JCRC. Earlier this year, in fact, David Bernstein, the President and CEO of the Jewish Council on Public Affairs (the parent organization of JCRCs around the country), wrote an op-ed in which he thoroughly denounced “the solidarity between the Black Lives Matter and Palestine movements” and made a strong pitch for finding allies that will help them drive a wedge into Black-Palestinian solidarity. (Notably the Boston JCRC statement referred to its “friends and neighbors in the African-American community” who share their views on Israel and Zionism.)

I was very disappointed however, to read a statement released by Tru’ah – a progressive rabbinical organization that advocates for human rights that has in the past articulated strong support of BLM. Yet in their immediate response to the M4BLM platform, T’ruah spent almost all of its wordage decrying the genocide reference and BLM’s support for BDS.

Though I have many friends and colleagues in T’ruah whose work I respect greatly, I find this statement much more disturbing than the one released by the Boston JCRC. While the latter group openly vilifies the BLM movement, T’ruah purports to stand in solidarity with them. As opposed to more conservative Jewish establishment institutions, I’ve always had the impression that T’ruah truly “got it” when it came to the BLM movement.

On T’ruah’s website, for instance, you will find a powerful “Prayer for Black Lives Matter“. You will also find a post written by Rabbi Susan Talve and Sarah Barasch-Hagans entitled “10 Rules for Engagement for White Jews Joining the Black Lives Matter Movement,” a smart and insightful document that appears to grasp the complex issue of allyship. Among the rules listed are “Practice Deep Listening and Less Talking;” “Do Your Own Communities’ Work” and “Hold Yourself Accountable”.

In the rule, “Go outside of your comfort zone while staying in your lane,” the authors write:

Pay attention. Don’t hide when it gets messy. We all have a role to play and we will all make mistakes. Accept guidance. Remember this is a movement to awaken compassion. No name calling. “Call people in” rather than calling them out. Give the benefit of the doubt whenever possible. We are all sad and scared (or should be). Faith communities can be bridge builders, healers, and witnesses in this movement to make Black and Brown lives matter.

Sadly, T’ruah itself has broken its own rule by releasing this statement. If they truly purport to stand in solidarity with BLM, they cannot publicly “call them out” because their new platform lands outside their comfort zone. If they were to be true to their own articulated values, T’ruah should have reached out to them, engaged with them and tried to understand where they were coming from, thus opening a real dialogue. T’ruah does not give the BLM “the benefit of the doubt” when it issues an immediate counter-statement such as this; tantamount to a group in a position of power saying to an oppressed group, “we will stand in solidarity with you but only on our terms.”

The claim that Israel is committing “genocide” against the Palestinians undeniably pushes all kinds of buttons for many Jews. But there are also Jews and Israelis who feel it is not an inappropriate word to use, particularly in regard to Israel’s regular military assaults against Gaza. Likewise, while the BDS call is extraordinarily controversial for many Jews, there are also Jews who respect it as a legitimate call for nonviolent resistance from over 150 Palestinian civil society organizations. And it is simply not true to claim, as T’ruah does, that “the BDS movement (rejects) Israel’s right to exist.” On the contrary, the goal of the BDS call is equal rights for Palestinians as well as Jews.

But even if T’ruah feels it is wrong for BLM to refer to Israel in this manner, it can’t claim to stand in solidarity with them while publicly calling them out over the parts that make them uncomfortable. Rather, they should hold themselves to their own standard by “calling BLM in,” engaging with them and be “bridge builders” – especially in the places where there is pain or disagreement.

At the end of the day however, I don’t think this is T’ruah’s issue alone – it’s a challenge for the entire progressive Jewish community at large. If we claim to ascribe to a power analysis that views systems of oppression as intersectional and interrelated, we simply constantly cannot make an exception when it comes to Israel. The black community is increasingly finding common cause with Palestinians – and for good reason. Both are oppressed by the same systems, the same weapons, and the same security companies. It is not by coincidence that American police departments around the country are increasingly trained by the Israeli military.

If we truly seek to be to relevant this undeniably growing movement, we need to make these connections as well. No matter how uncomfortable it might make us.