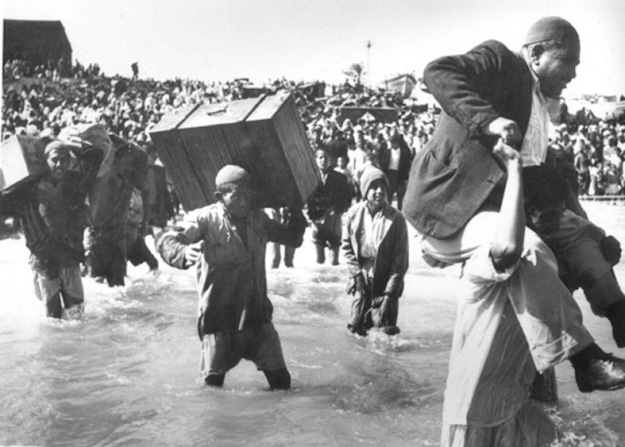 Rabbi Yehuda said: There is no removal of leaven except by burning; but the Sages maintain: he may also crumble and throw it to the wind or cast it into the sea. (Mishnah Pesachim 2:1)

On the eve of Passover, April 21, 1948, leaflets and loudspeakers fell from the sky ordering the 75,000 Palestinian Arabs of Haifa to send their women and children away, promising terrible consequences if these warnings were disregarded.

At 6:30 pm a joint force of the Haganah and Irgun known as the Carmeli brigade opened fire on the lower regions of the city. The military called this “Operation Biur Chametz,” (“Operation Cleaning Out the Leaven”) a reference to a sacred Jewish tradition, commanding that leaven be swept out of Jewish homes before the onset of Passover.

This strange cacophony of loudspeaker voices and gunfire lasted until midnight. All night long, panic stricken civilians fled homes that lay in the path of the Jewish militias streaming into Wadi Nisnas and the areas nearest Hadar HaCarmel.

We proceeded to advance through Haifa like a knife through butter. The Arabs began fleeing in panic, shouting “Deir Yassin!”

By 6:00 am, the cacophony now included the cries of fleeing families and new loudspeaker voices – Arab leaders urging residents to gather in the old marketplace next to the port until an orderly evacuation by sea could be organized.

As Passover day unfolded, Haifa’s market and port turned into a scene of utter chaos: children in pajamas, men in old fashioned nightshirts, women carrying babies, all running desperately toward the water. Shortly thereafter, the Carmeli brigade stationed itself on the slopes of Mt. Carmel and launched three inch mortars on the fleeing crowd below. Eventually the people broke through the port and tried to climb aboard the boats moored in the harbor. One survivor later recalled:

Men stepped on their friends and women on their own children. The boats in the port were soon filled with living cargo. The overcrowding in them was horrible. Many turned over and sank with all their passengers.

When the week of Passover was concluded, scores of Palestinians had been killed and 50,000 expelled from their homes.

The cacophonies have long since receded and today a soft stillness hovers over the slopes of Mt. Carmel. But every Passover, if you listen closely to the water lapping back and forth across the the shores of Haifa you will surely hear a voice whispering softly:

How can you sing your songs of joy while my children are drowning?

(Sources: Benny Morris, “The Birth of the Palestinian Refugee Problem Revisited,” Ilan Pappe, “The Ethnic Cleansing of Palestine,” Menachem Begin, “The Revolt: The Inside Story of the Irgun,” Walid Khalidi, “All That Remains: The Palestinian Villages Occupied and Depopulated by Israel in 1948,” website: “Palestine Remembered.”)