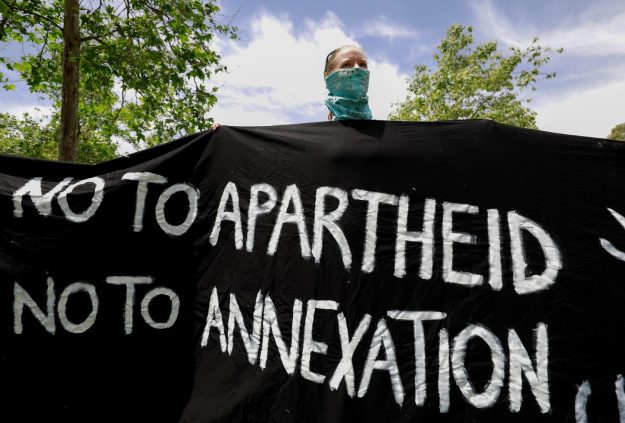 The day of Israel’s annexation of major West Bank settlement blocs has now come and gone. But while it didn’t actually happen, it’s not quite time to breathe a sigh of relief.  The Israeli government has made it clear that annexation plans are continuing apace and has now moved the deadline to later this month.

There’s so much to say about Israel’s plans to extend its sovereignty over major portions of the West Bank. For my part, I anticipated the response of the American Jewish communal establishment with particularly morbid fascination. How would these organizations, hardwired to defend Israel’s actions at all costs, possibly respond to what most would consider to be a patently immoral and undemocratic political move? As it would turn out, their contortions were truly something to behold.

The American Jewish Committee, true to form, doubled down unapologetically. In an article for the Times of Israel, AJC’s Chief Policy and Political Affairs Officer openly stated that when annexation came to pass, “we will make the strongest possible case for a decision reached by an elected Israeli government and supported by Israel’s (and anyone’s) most powerful partner, the United States.” In its FAQ sheet, the Jewish Federations of North America attempted to explain the nuanced differences between “annexation” and “applied sovereignty.” And the Anti-Defamation League, in a leaked internal memo, tellingly agonized over how they might “find a way to defend Israel from criticism without alienating other civil rights organizations, elected officials of color, and Black Lives Matter activists and supporters.”

In the end, the tortured moral/political posturings of these Jewish establishment institutions didn’t really surprise me all that much. They are who they are. But it was much more troubling to read the responses of the “liberal” institutions of the American Jewish community, who continue to enable Israel’s institutional oppression of Palestinians by trotting out their increasingly meaningless talking points of “Jewish and democratic” and “two-state solution” while consistently expressing little to no concern for the well-being of Palestinians themselves.

The Union for Reform Judaism began its statement by announcing its bona fides as “a proud Zionist movement.” It went on to express concern that annexation would “create significant diplomatic risks for Israel, jeopardize Israel’s security, jeopardize North American strategic interests,” and “repudiate the two-state solution.” In a particularly delicate turn of phrase, the URJ mentioned its potential “deleterious impact on the Palestinian people.” Even here, however, the issue was not Palestinian human rights per se, but Israel’s “moral standing,” which depended on “its commitment to ensuring that Palestinians do not live as second-class citizens.”

Another statement, signed by the ten members of the “Progressive Israel Network” (a coalition that includes J Street, the New Israel Fund, Truah, Americans for Peace Now, and my denomination, Reconstructing Judaism) pointed out that annexation would be counter to international law, endanger the well-being of the Palestinian Authority and harm the US-Israel relationship. Carefully avoiding use of the word “apartheid,” the statement expressed concern that annexation “would enact an institutionalized, formal system of discrimination between two ethnic-national populations, both living in the same territory, with each governed by a separate set of laws.”

I’ll confess that when I first heard of the unity government’s plans for annexation, I had a glancing thought that we’d finally arrived at a “moment of truth” for the American Jewish community. I immediately thought better of it, of course. As a former liberal Zionist myself, I’m very familiar with the “window is closing on the two-state solution” trope. It’s a desperate and hollow ploy, designed to avoid facing (or distract attention away from) the hard truth that one-state apartheid has been the reality in Israel/Palestine now for decades. Palestinian activist/scholar Yousef Munayyer put it well in a recent post for +972mag: “Contrary to the popular narrative, annexation will not kill the two-state solution — you cannot kill something that has long been dead. Rather, annexation is dragging and displaying the two-state solution’s corpse before the world.”

So here’s the thing: for years I’ve harbored the assumption that one day the time would come when these liberal Zionists organizations would finally say enough is enough. There is no way Israel can possibly be “Jewish and democratic.” The two state solution is a pipe dream that will only enable further oppression on the ground. The only answer is to give up on the notion of Jewish political nation statehood and advocate for full equality for all who live between the river and the sea.

But no more. I cannot honestly imagine any political event in Israel that would cause these so-called “progressive” Jewish institutions to ever cross this rubicon. Does anyone honestly believe the URJ, who defines itself as a “proud Zionist movement” will ever advocate for one democratic state of all its citizens in Israel/Palestine? Can we truly envision J Street or Americans for Peace Now, organizations that stake their very existence on a “Jewish and democratic” state of Israel, pulling their support for a Jewish state because it has finally become too undemocratic for them?

I have no doubt that when Israel does finally announce its formal annexation, these organizations will move the goalposts yet further down the road. They will studiously avoid use of the word apartheid while implying it could still happen if Israel does not change its ways. It will continue its warnings that Israel’s democracy is under threat, even as its institutional oppression of Palestinians continues to remain so tragically obvious for the world to see.

Consider this: while these organizations agonized over the issue of annexation, the UN Office for the Coordination of Humanitarian Affairs (UNOCHA) released a report that revealed the Israeli military had demolished at least 70 Palestinian buildings in the West Bank during the first two weeks of June, displacing 90 Palestinians. This represented a 250% increase over the weekly average of home demolitions since the beginning of 2020. It was also reported that the during this period the Israeli military forced 20 Palestinian households in East Jerusalem to knock down their own newly-built homes themselves.

This, to put it plainly, is annexation. Annexation is an institutional process by which Israel dispossesses Palestinians so that it can maintain a demographic advantage on land it has long sought to control. Annexation is not a line to be crossed by the Israeli government sometime down the road. It has been happening since 1948 and it is happening right now. And it will continue to happen until the racist system that enables it is finally dismantled.

I know this sounds harsh – perhaps terrifyingly unthinkable – to many in the American Jewish community. But in this powerful political moment, it should be clearer than ever that equity, justice and rights for all people will only happen when we honestly reckon with the legacy of institutional racism. So yes, let’s protest annexation. But let us also commit to fundamentally changing the structures that have been enabling it for far too long.