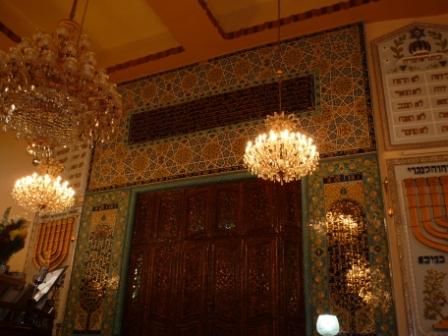 Greetings from Iran! We arrived on Friday with no problems and have now settled comfortably into our home at the Howeyzeh Hotel in Northern Tehran. Since we actually arrived at 2:30 am, our first day here was really a half day. When we arrived at our hotel, we went promptly to sleep and woke up in time for lunch. We were delighted to see our friend Leila Zand, the FOR staff person in charge of organizing our trip. We were even more delighted to learn that she will be joining us for the duration of our delegation. Leila is an Iranian woman who has lived in NY for the past several years and in the short time we have gotten to know her, she has already become a dear friend to us.

After lunch many of us took the opportunity to informally walk in groups about the area near our hotel. It is no problem for us at all to walk about freely and it felt perfectly natural to do so. The neighborhood here is a downtown area, full of shops, offices and apartment buildings. Tehran is very much the big city, big, noisy, bustling and filled with constantly-busy trafffic. Even so, there was not a moment in which we felt unsafe and although we were clearly western tourists, many people smiled and nodded at us as we went by. Many in our group reported that they struck up conversations with folks – one group met some people who turned out to be Jewish and were excited to meet a group with American Jews. They invited us to their shul (which is apparently within walking distance to the hotel) for Shabbat services tomorrow morning.

Later in the afternoon we went to Shabbat services at the Abad Yosef synagogue, also in Tehran. Although it is a relatively new shul by Iranian standards, it definitely has a venerable quality about it. The sanctuary is breathtaking, the ark decorated by exquisite tiling and mosaic in the Persian/Middle Eastern style (see pic above). We were the first to arrive and when we settled in for services there were maybe only 20 elderly worshippers with us. That soon changed. Like shuls everywhere, folks gradually trickled in and before we knew it, we were surrounded by over 200 people. The vitality and vibrancy of the community was truly something to behold – older men davening, people chatting animatedly, young children running and playing throughout the sanctuary. The service was led by a variety of members at different points, including young teenagers. The style of the service was what is typically referred to as Mizrahi (Eastern), sung in distinctive Middle Eastern nusach (melody).

As in most traditional shuls, there was something of a happy chaos to the proceedings. For some members of our group it was their first experience in a Jewish service. While it was virtually impossible to follow along at times, the atmosphere in the sanctuary was warm and infectious. After the rabbi gave a sermon on the weekly portion, our group was introduced to the congregation by Dr. Rahmat ollah Raffi, the President of the Tehran Jewish Committee (with me, below). Rabbi Lynn Gottlieb, one of the leaders of our group addressed the congregation and thanked them for receiving us. Rabbi Lynn attended the FOR Iran delegation last spring, and she was clearly familiar now to many in the room. When she asked our delegation to stand, the crowd burst out in loud applause. Then she introduced another member of our group, Sarah Bassin, and told them she was a studying to become a rabbi, the applause got even louder. When Lynn first visited, it was the first time a female rabbi had visited Iran. Obviously this is a concept with great appeal in this country. (Lynn told me later that after the service, a man came up to her and said he hopes his daughter will be able to become a rabbi some day). 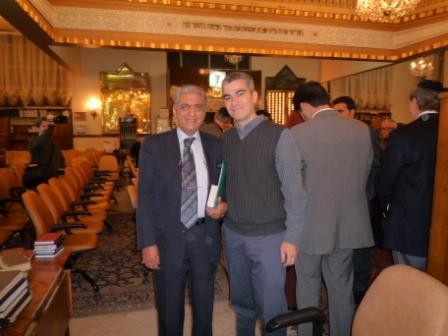 Lynn then introduced me to the congregation and I got up and delivered a short Dvar Torah on the weekly Torah portion, which begins with the birth of Jacob and Esau. I mentioned to the congregation that since these twins are struggling in the womb, we might deduce from the text that war is simply preordained, inevitable. But of course we will soon learn that is in not that simple. Jacob will struggle mightily over the next two portions, and this struggle will transform him in powerful ways. So much so, in fact, that when he eventually meets up with his brother again, they will put their arms around one another once again – but this time they will embrace in forgiveness and reconciliation. Jacob remarks that to see his brother’s face is like seeing the face of God.

I concluded that our delegation was in Iran to prove this very point: that while too many believe that conflict is inevitable between our peoples, we are here so that we may truly look into the faces of our Iranian brothers and sisters – and in so doing to discover the face of God.

After the service we were received with great delight and enthusiasm, staying for introductions and conversations for the better part of an hour. What an incredible first experience for us. Most Westerners don’t even know that there are Jews in Iran, let alone a community this rich and vibrant. More importantly, though, it truly reminded us of why we have come: to reach out, to make friends, to build relationships, to find our common humanity. It certainly hasn’t taken us very long. Not even 24 hours in Iran and it already feels like we are home.

3 thoughts on “Shabbat at Abad Yosef”