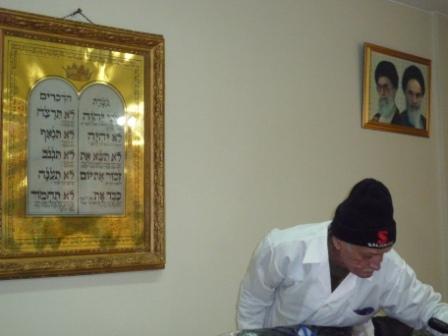 Our last day in Tehran was a rainy one, beginning with a visit to the headquarters of the Tehran Jewish Committee (roughly the equivalent of the Iranian Jewish Federation). We spoke at length with Committee President Rahmat ollah Raffi, who gave us a thorough tutorial on the Iranian Jewish community. In short: there are roughly 20 – 22,000 Jews in Iran. The majority live in Tehran, followed by Shiraz and Esfahan. Jews have had a long and noble presence in Persia – they have lived there for almost 3000 years, making them the oldest Diaspora Jewish community in the world.

Before 1979, there were over 100,000 Jews in Iran. As many were royalist supporters of the Shah, tens of thousands of Jews emigrated following the Islamic revolution. Most now live in the United States – there are approximately 40,000 Iranian Jews living in Los Angeles alone. The Jews who chose to remain in Iran, however, are fiercely proud of their Persian Jewish heritage and those with whom we spoke told us they feel very comfortable living as Jews in an Islamic nation. Judaism, along with Christianity and Zoastrianism, are officially recognized religions, which allows them to get significant subsidies from the government as well as Parliamentary representation. (It was pointed out to us that while the Iranian Constitution stipulates one member for every community of 500,000, the Jewish community has been granted a representative even though they only number 20,000).

The Tehran Jewish Committee (and other Jewish centers in smaller Jewish communities) supports a variety of community institutions, including synagogues, religious schools, kosher butchers and restaurants, and Jewish cemeteries. They also support major Jewish medical center in Tehran about which they spoke with particular pride. The Dr. Sapir Hospital was founded 60 years ago and was originally the only hospital serving the Jewish community in Iran. It now has 120 beds and only 5% or so of their patients are Jewish. Most of the physicians, however, are Jewish and many of them have received awards from the government. Remarkably, Sapir Hospital receives no money from outside Iran. (Pic below: Alan Gratch and FOR Executive Director Mark Johnson at the entrance to the Center office). 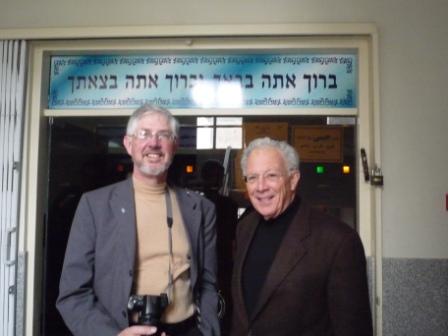 The Center is also extremely active in Jewish cultural projects: they publish a Jewish magazine called “Bima,” and have begun publishing cultural/religious books in Farsi. All told, the activities of the Iranian Jewish Committee point to a strong Jewish community. One leader told us that they considered themselves to be Iranian Jews rather than Jewish Iranians – their strong connection to Persian heritage is in many ways the primary and driving aspect of their Jewish identities.

The Jewish leaders with whom we met stressed repeatedly that they have good relations with the Islamic government and said that they strive to remain apolitical in all their dealings. In certain ways, however, it seemed to me that for them, “apolitical” meant toeing the Iranian political party line. Their attitude toward Israel is the most primary example – whenever they spoke of Israel, it was invariably in a disparaging manner characteristic of official Iranian government pronouncements. Although they insist they live well as Jews in Iran, it seemed clear to me that they’re extremely careful not to make waves.

Though it’s hard to imagine that Iranian Jews don’t feel their existence in the Islamic Republic isn’t precarious to some extent, we still came away from our meeting with the impression that this was a vital community with a strong sense of itself and its heritage. One man we spoke to said that religious Jews generally welcome the opportunity to live in a religious nation. He added with sadness that Iranian Jews who emigrate to America tend to assimilate into secular American culture. Here in Iran, he said, Muslim religiosity tends to dovetail with Jewish religiosity, especially with those customs that are similar to Islamic customs like head covering or regular daily prayer. (Check out the interesting pic at the top: our meeting room at the Jewish Committee’s office: note the wall with the Jewish Ten Commandments next to the pictures of Ayatollahs Khomeini and Khameini…)

Even with all the complexities involved, I can’t help but feel that we American Jews are missing out on a huge opportunity by failing to learn about and forge greater ties with Iranian Jewry. This is truly an exciting and vibrant community and we clearly have a lot to learn from each other. I’m excited with the prospect of building upon the relationships that we’re creating here.

The other highlight of our day was a visit with Habib Ahmadzadeh, an Iranian writer, filmmaker and peace activist. Habib, who we met through Leila, is a veteran of the Iran-Iraq war. He was sixteen years old and living in a West Iranian border town when the Iraqi army invaded and he spent the next eight years defending his home town. Most of Habib’s creative work deals with war – and with the Iran-Iraq war in particular. One of his novels was recently translated into English and he wrote the screenplay for the acclaimed Iranian feature film, “Night Bus,” based on one of his short stories. (That’s me and Habib in the pic below): 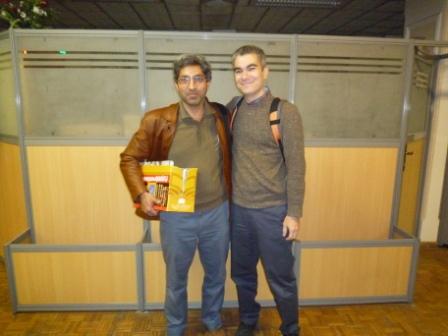 We met Habib in his Tehran office, where he screened the film for us. It’s a powerful war drama about a teenage Iranian soldier who is given the job of escorting 38 Iraqi POWs on a bus to prison camp. In our conversation afterwards, we learned that the majority of the events in the movie were based on his own war experiences.

We in the West know very little about this eight year war, but it for Iranians it continues to be a traumatic and transformative event. Almost an entire generation of young Iraqis were decimated by the Iran-Iraq war, in which hundreds of thousands of young, ill-equipped Iranian men were sent in human wave attacks to almost certain death. Many, including Habib, are living with the terrible after affects of chemical weapons poisoning.

In addition to his creative work, Habib is a committed anti-war activist. His production company recently took “Night Bus” to the western border towns to screen for young people in the small western communities where the war was fought. He hopes to show the film to greater numbers of Iraqis as well, to help raise consciousness about war and its tragic after affects.

Habib has also worked considerably to raise awareness about the downing of an Iranian passenger plane by an American warship, the USS Vincennes, in 1988. 290 Iranian civilians died in this tragedy, which the US government originally covered up and for which it has never apologized. (Adding insult to tragedy, some officers of the Vincennes were actually awarded medals in the wake of the disaster). Again, most Americans barely remember this event, if they remember it at all. But as Habib and others have told us, Flight 655 is Iran’s 9/11 – and it remains as yet one more painful obstacle to Iranian-American reconciliation.

Habib has gained some fame for a public letter he wrote to the Captain of the Vincennes, Will Rogers III, who remains implacably unrepentant to this day. It’s a remarkable document, filled with pain, but also a powerful palpable desire for reconciliation. In its way, I think, it seems to speak for many in this country.

Tommorow we’re off to Qom to dialogue with Muslim scholars at Mofid University.

3 thoughts on “Rainy Day in Tehran”