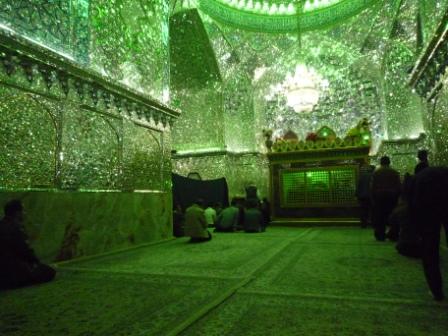 As the sun went down on Friday night, we gather in the venerated shrine of Ali Ibn Hamzeh (above and below). The inside of the mosque is inlaid with countless small mirrored tiles that reflect fragments of light, movement and the faces of everyone inside. As a young boy intones “Allah Hu Akhbar!” over the loudspeaker, worshippers file in, kneel and begin to pray. Even though it’s not my prayer tradition, even though I’m merely a guest, I’m palpably aware that I’m dwelling in sacred space and sacred time. I’m also also all too mindful that our journey through Iran is fast coming to a close. 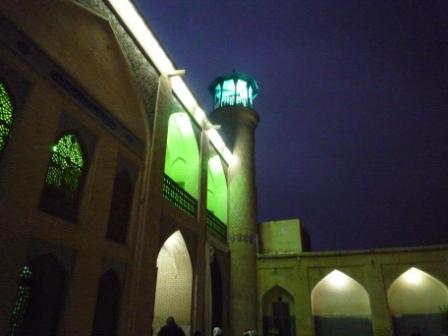 Earlier in the day, we visited with the leaders of the Shiraz Jewish community. It’s obviously a smaller community than the Jewish community of Tehran, but it’s vital and active nonetheless.  We learned that there are approximately 6,000 Jews in Shiraz and that their presence here dates all the way back to Cyrus the Great. The current Shiraz Jewish Community Center was founded 70 years ago ; there are 17 active synagogues and though there is no rabbi specifically the city, the community has been trained to take care of all of its essential religious needs. (Below: me and Moshe, who speaks fluent Hebrew and serves as an important religious resource for Shirazi Jews).

Like the Jewish leaders of Tehran, the Jews of Shiraz reminded us that they consider themselves to be Iranian Jews. I am beginning to understand why they feel this way. After all, for most of Jewish history, Jews have wandered from place to place throughout the world – but Jews have lived here in Iran literally for over 3,000 years. It is their home in a way that most of Jews can only barely begin to understand, and it is clear that they have a deep and sacred bond to Persian culture, land and  heritage.

We had a fairly lively dialogue and we appreciated that they were as interested in learning about us as we were about them. We discussed in particular the differences between living as Jews in a religious nation and living in a country that separates church and state.  They articulate a strong appreciation for living in a country where the Supreme Leader is a religious leader and where religious values are central to the life of their nation. And like the Jews of Tehran, they insist that they enjoy religious freedom in their country and are perfectly comfortable living as Jews in an Islamic state.

It was a warm and fruitful exchange, and when we ended they expressed a very strong desire to have a deep and substantive relationship with American Jews. For our part, the Jews of this delegation share this desire and are already thinking of ways we can build upon the connections we have created here. (Below: Rabbi Lynn and Parisa, the chair of the Shiraz Jewish Women’s Committee.)

The trip is winding down but there’s still much more to say. In my last post, I’ll offer some concluding thoughts…

2 thoughts on “Spirit in Shiraz”