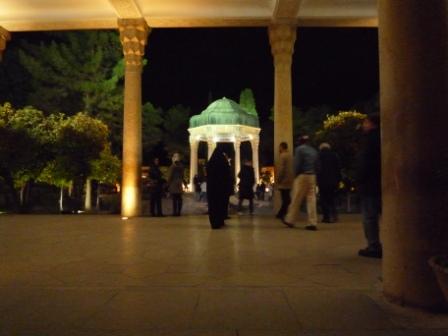 We’ve spent the last two days in Shiraz – and among other things our experience in this beautiful city gave us a still deeper into to Persia’s soul.

We’ve been told that while Esfahan is generally considered to represent Iran’s historical spirit, Shiraz reflects Iran’s cultural spirit. Indeed, while Iran is an Islamic Republic, Islam is not the only defining aspect of Iranian identity.

Among our many visits in Shiraz was a visit to Zoastrian Fire Temple. Zoastrianism was the religion of the ancient Persian empire and remained so until the Arab conquest converted Persia to Islam in the 7th century. Today, although the active Zoastrian community of Iran is extremely small (there are approximately 1,000 in the country) it continues to occupy an important place in Persian culture. All Iranians regardless of their religion identify with the traditions of Zoastrianism, which is in a sense regarded to be their “native religious culture.” The festival of Yalda, which occurs during the Winter Solstice and Noruz, the two week spring celebration of the Zoastrian New Year, are universally popular national holidays. 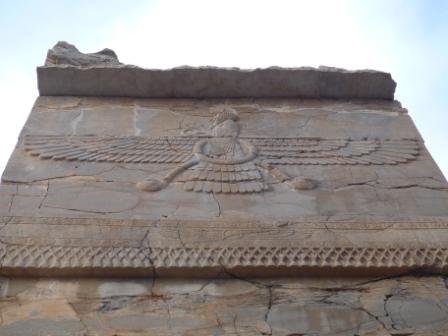 It would have been extremely interesting to dialogue with members of the Zoastrian community, but alas, we learned at the last minute that they were not available to meet us at the Temple. Still, it has been impossible for us to ignore the impact of this ancient religion upon present day Iran. The image of Ahura Mazda, the Zoastrian God, is ubiquitous throughout the country, not only at the ancient ruins of Persepolis (above), but on travel signs, office buildings and souvenir stands.

An interesting anecdote in this regard: when we were at Mofid University in Qom, one young student of Islam proudly showed me his Ahura Mazda necklace, and told me this image was an important part of his history. When I asked if any of his clerical teachers objected, he emphatically shook his head. “It is an important part of our history,” he said. To be sure, more than one person has told us that the Islamic regime is lenient about such things because it understands the importance role Zoastrianism plays in the cultural life of Persia

Another central aspect of the Iranian collective soul, of course, is their poetry. Iranians are justifiably proud of their literary tradition; every Iranian child is read Ferdowsi’s epic “Shahnameh” as well as national poets such as Hafez, Saadi and Rumi.  The more time we spend here, the more I realize we can never underestimate the depth of pride that Iranians have in their national/cultural traditions. It is a modern-day nation can literally experience its own history back across thousands and thousands of years. And though they have been dominated by countless empires over the centuries, they have never surrendered their unique connection their culture, their heritage, their history, their language.

This is something that is very difficult for Americans in particular to grasp – our national history goes back little more than 200 years and most of us ultimately originate from somewhere else. While we study American history, our connection to it is nowhere near as profound at that of Iranians to theirs’.  At the same time, for most Americans, Iran is just another Islamic nation in the Middle East. However, you have only to spend a small amount of time here to understand that this country is much, much more.

I’m sure this sounds like a cliché, but it’s true: in order to understand Iranians, you must understand their poetry. Or at the very least, to their deep connection to their poetry that truly sings in their soul. For example, among the most important cultural landmarks in Iran are the tombs of their poets, which serve as almost quasi-sacred sites. Last night we went to two of the most important in Shiraz: the Tomb of Saadi and of Hafez. I’m still at bit mind-blown by our experience at Hafez’s tomb in particular (top pic), which was unlike anything I’ve ever experienced. It’s an immensely popular site for Iranians, particularly young Iranian young people, whose idea of a great evening is to visit Hafez’s tomb and read his spiritually passionate poems of wine, longing and romance (see below). It’s also something of a romantic hot spot, where young people can mingle, meet and (I imagine) maybe even get lucky…

We’ve heard that the social atmosphere in Shiraz is a bit looser than in other Iranian cities, and that the regime’s “Morality Police” tend to let things go there a bit more easily. And apparently the Tomb of Hafez is one of the few places in Iran where young people of the opposite sex can mingle together publically without few of official harassment.

This certainly seemed to be the case last night. Throngs gathered near and around the crypt, reading poems, laughing and chatting. We spent a fair amount of time meeting and talking to folks and wouldn’t you know it, inevitably someone from our group got hit upon. Sarah Bassin reported later that a young man approached her, asked her where she was from, told her about how bad his marriage was, then proclaimed to her: “Your face is delicious.”

After teasing Sarah mercilessly about her quintessentially Persian encounter, we all agreed that our brief sojourn at Hafez’s tomb was unexpectedly and deeply moving. I’d say there is much we Americans can learn from a culture as profound as this one.

5 thoughts on “Pickup at Hafez’s Tomb”