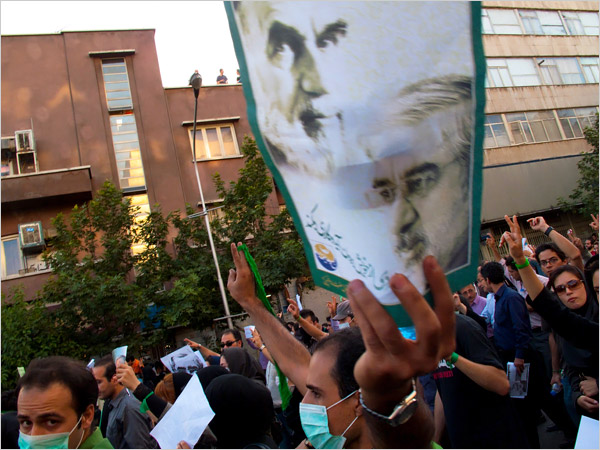 In my final post from my visit to Iran this past fall, I wrote the following:

We’d be foolish to deny that there are troubling human rights issues that Iran would do well to address. But at the end of the day, the solutions to these problems are certainly not ours to impose.

I felt that passionately then and as I watch the Iranian people take to the streets day after day to demand justice in their country, I feel it even more passionately now.  I’m also immensely proud that our President refuses give in to the misguided voices that urge him to force himself on this process as it unfolds. Our country seems to finally be learning that imposing our “democracy” on other countries might not be the most effective foreign policy.

This is particularly the case with Iran, a nation that has experienced its share of empires meddle in its affairs over the centuries. Indeed, even as thousands of the Iranian people bravely demonstrate for democracy, you can be sure that it is lost on none of them that the last country to overthrow an Iranian regime was none other than the United States. The Islamic Republic may be odious in any number of ways, but at the end of the day, we must remind ourselves that it is the first Persian regime in centuries that truly belongs to its people.

Yesterday, I read a letter to the editor of the NY Times that said simply: “The Islamic Revolution has become the shah.”  A horribly mistaken analysis. For Iranians, the Shah was not simply an oppressive ruler – he was an oppressive ruler who was installed by the Americans after they took it upon themselves to overthrow Iran’s democratically elected Prime Minister.

Take a look at the picture above (also from the New York Times.) It’s very telling: a demonstrator’s sign juxtaposes the Ayatollah Khomeini with Mir Hossein Moussavi (who was himself one the leaders of the 1979 revolution. An interesting article in today’s NY Times, in fact, explores the historically close relationship between Khomeini and Moussavi.)

This is enormously important for us in the West to understand: whatever we might think about Khomeini, in the eyes of many Iranians, he was the one who gave their country back to them. Whatever we might think about the republic to which the revolution gave rise, it is the Iranians’ republic. Those who demonstrate in the streets are not rebelling against the revolution – they are demanding that it live up to its promise.

“Justice, justice shall you pursue.” This is what precisely what we are witnessing in the streets of Iran. We can surely support their pusuit in any number of ways, but in the end, this particular justice is theirs’ to pursue and achieve – not ours’ to dictate.

PS: Among the many blogs and e-news outlets I’ve been following, my favorite is a photo blog called Tehran 24 that updates daily with astonishing pix of the demonstrations. Definitely worth a thousand words…

4 thoughts on “Iran for Iranians”