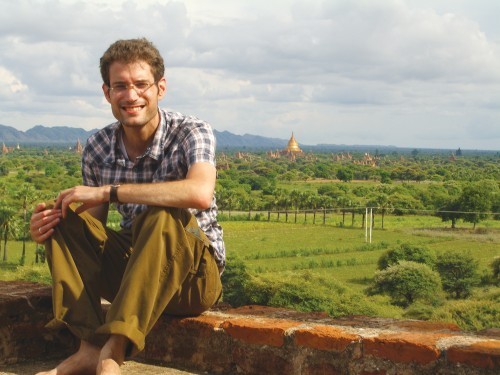 Here’s one I’ve been meaning to get to for a few weeks now: a great point/counterpoint between Rabbi Daniel Gordis and journalist Charles London (above).

Back in February, Gordis wrote a Jerusalem Post column in which he addressed Im Tirtzu’s nasty campaign against the New Israel Fund and its President, Naomi Chazan.  His conclusion: while Im Tirtzu may have gone a bit overboard in its rhetoric, folks need to understand that the Jewish people are at war with those who would “delegitimize Israel.”  And when you are fighting a war, you can ill-afford luxuries such as civil liberties:

Commitment to our democracy must not come at the cost of commitment to our survival. No country at war maintains the same freedoms of speech or action that countries not facing existential threat can permit themselves. Since the Jewish people is at war, it must think as a people at war must think.

In my experience around the world, the Jewish people are not at war. There are Bosnian Jews building institutions in cooperation with their Muslim and Christian neighbors; there are Ugandan Jews who are at war with Malaria, HIV, and poverty, but not with some eternal anti-Jewish enemy. There are Iranian Jews struggling alongside Sunni, Shiite, Christian, and Baha’i for the very “liberties” their government denies all Iranians. There are Israeli Jews who are trying to build democratic institutions, multi-ethnic schools, and interfaith understanding, all of whom should take serious umbrage at his characterization of the Jews as a people at war.

Yes, the Jewish people face challenges today, but we have faced daunting challenges throughout our history. And through them all, we have resolutely rejected the notion that physical might can ensure our survival. Mighty empires have come and gone, but the Jewish people have remained not by compromising our values (as Gordis counsels) but by affirming them.  By connecting our survival to a more transcendent truth.  By asserting that there is a Power far greater than physical power.

On this point, the young journalist eloquently reminds the rabbi:

I fear that arguments like Gordis’s war without end and war that values cannot endure undermines the spiritual genius of our culture. Jews have not survived for 2500 years because of nation-states, nor because they were not willing to risk life and limb for higher values. They have not survived merely to survive.

If this Jewish vision is your cup of tea, check out London’s recent book “Far from Zion: In Search of Global Jewish Community.”  (I far preferred it to Gordis’s “Saving Israel: How the Jewish People Can Win a War That May Never End.”)

9 thoughts on “Charles London to Daniel Gordis: Israel may be at war, but the Jewish People are not…”