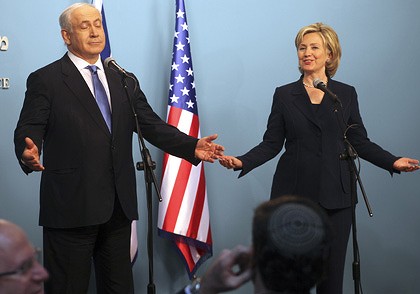 Prime Minister Benjamin Netanyahu of Israel has agreed to push his cabinet to freeze most construction on settlements in the West Bank for 90 days to break an impasse in peace negotiations with the Palestinians, an official briefed on talks between the United States and Israel said Saturday evening.

In return, the Obama administration has offered Israel a package of security incentives and fighter jets worth $3 billion that would be contingent on the signing of a peace agreement, the official said. The United States would also block any moves in the United Nations Security Council that would try to shape a final peace agreement.

The quid pro quo was hashed out by Mr. Netanyahu and Secretary of State Hillary Rodham Clinton in seven and a half hours of talks in New York on Thursday.

According to Peace Now’s most recent research, in six short weeks, Israel has all but made up for the construction it lost during the ten month freeze. So that means we’re back to square one. And since this new ninety day freeze is “nonrenewable,” this latest breakthrough is essentially meaningless (except perhaps as a face-saving maneuver on for the Obama administration).

We’re also told that this new freeze would not include East Jerusalem, which was likewise never a part of the last freeze – when home demolitions, evictions of Palestinians, and plans for new Jewish construction continued apace.

(I personally find American Jewry’s deafening silence over what is going on in East Jerusalem to be beyond egregious. Can’t find it in your heart to address the humanitarian implications? Fine. But if you are at all a proponent of the two state solution, you should at least be concerned that Israel’s actions have now made the prospects for a shared capital in Jerusalem all but impossible).

By any other name, this latest diplomatic “breakthrough” is nothing but a fig leaf.  Does anyone really believe that anything substantive will be accomplished during a ninety day settlement (non) freeze? When will our community find the courage to name these dangerously empty gestures for what they really and truly are?