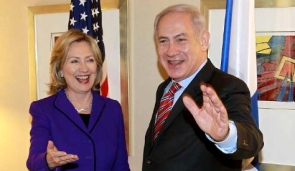 Does anyone really believe that anything substantive will be accomplished during a ninety day settlement (non) freeze?

According to many peace process policy wonks, the answer is as follows:

The logic behind a 90-day extension is that the two sides would aim for a swift agreement on the borders of a Palestinian state. That would make the long dispute over settlements irrelevant since it would be clear which housing blocks fell into Israel and which fell into a Palestinian state.

This approach is known by said wonks as “Borders First” – and it’s not the first time it’s been attempted by the US. It was, in fact, the method of choice more than a year ago, when the Obama administration first started engaging seriously with the peace process – and the potential pitfalls with this method were pointed out even then.

Indeed, “borders first” negotiations under current conditions — especially if Gaza is ignored and the Jersualem area either deferred or ratified — might well lead not to a two state solution but to what I’ve heard described as a “five statelet” outcome: Israel, Gaza, Ramallahstan, Nablusstan in the northern West Bank and Hebronstan in the southern West Bank.  Does anyone really think that this would be the foundation for an end of conflict agreement?

So if ‘borders first’ is going to be the approach to negotiations then I sure hope that early attention is paid to the questions of Gaza and Jerusalem.  If serious spoiler violence is to be avoided, then Hamas and its constituency are going to have to be engaged.  If acceptable borders are going to be drawn, they have to grapple with the realities of the Jerusalem area. And if it is meant to lead to a genuine and lasting end of conflict, then it can’t just be about borders — as Rob Malley has argued the Palestinian refugees need to be brought into the discussion.

I was full agreement with Mr. Aardvark then as now. But now it’s one year later and it seems to be deja vu all over again. While the US again pushes “Borders First,” other core issues are being completely ignored: Israel is still Judaizing East Jerusalem with abandon – and as for the crisis in Gaza, well, no one seems to consider the plight of that region issue even germane to the discussion any more.

I’ve been told Einstein didn’t actually say this, but it doesn’t make it any less true: “Insanity is doing the same thing over and over again and expecting different results.”