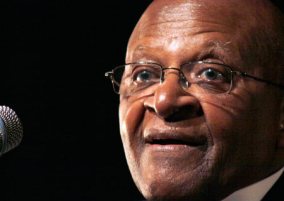 I have no doubt that he will once again incur the wrath of the Jewish establishment – especially since he criticizes the 1,200 rabbis who recently signed a public letter opposing church divestment:

While they are no doubt well-meaning, I believe that the rabbis and other opponents of divestment are sadly misguided. My voice will always be raised in support of Christian-Jewish ties and against the anti-Semitism that all sensible people fear and detest. But this cannot be an excuse for doing nothing and for standing aside as successive Israeli governments colonize the West Bank and advance racist laws.

I recall well the words of the Rev. Martin Luther King Jr. in his Letter from a Birmingham Jail in which he confesses to his “Christian and Jewish brothers” that he has been “gravely disappointed with the white moderate … who is more devoted to ‘order’ than to justice; who prefers a negative peace which is the absence of tension to a positive peace which is the presence of justice; who constantly says: ‘I agree with you in the goal you seek, but I cannot agree with your methods of direct action;’ who paternalistically believes he can set the timetable for another man’s freedom. …”

King’s words describe almost precisely the shortcomings of the 1,200 rabbis who are not joining the brave Palestinians, Jews and internationals in isolated West Bank communities to protest nonviolently against Israel’s theft of Palestinian land to build illegal, Jewish-only settlements and the separation wall. We cannot afford to stick our heads in the sand as relentless settlement activity forecloses on the possibility of the two-state solution.

Hear, hear. His invocation of MLK’s “Letter from a Birmingham Jail” is apt and spot on.

I’m particularly appreciative of the Archbishop’s shout out to “the brave rabbis of Jewish Voice for Peace.”  It’s wonderful to see our letter of support garnering such widespread acclaim from so many quarters.  And it’s especially gratifying to be showing a decidedly different face of the Jewish community to our brothers and sisters in the Christian community over this issue.

The divestment resolution is scheduled to voted on by the UM Conference plenum tomorrow. Stay tuned.

5 thoughts on “Archbishop Tutu in Support of Methodist Divestment”